This is a small tutorial to show how to get a simple Earth material.

This is mostly a response to a different thread but I figured it would be better as its own.
I also imagine this would be easier to search for as well.

I just want you guys to know before hand, I’m not a pro at UE4, I’ve only been using it for less than 2 months so my knowledge is still very limited.
So I don’t truly know the ins and outs, but I do have a rough idea.

I also don’t make tutorials often, so apologies if things aren’t really well explained, my own ignorance doesn’t help either.

In the end, I hope this helps

Base Color
There are 4 main color components to the planet, 3 of which we make here.
These components are, daylight color, night time color and clouds.

In the following image we have the 3 textures, their UV inputs will be discussed further in the post.
First we use the “Add” node with the Earth and the cloud textures, this will pretty much paste the clouds onto the Earth texture with the darker parts being transparent and the white parts being opaque.

Now for night time, before we blend the Night time Earth and cloud textures we make the Night time texture darker by multiplying it with a number less than 1 using the “Multiply” node, doing so mathematically is the same as getting a percentage of the original.

Finally we hook them up into a “Lerp” node or “LinearInterpolate” node. We’ll go over what goes into the Alpha further down.
Simply put, this node uses what ever is put into the alpha to blend between A and B.
Basic use of this would just have A and B blending together using a greyscale source, black only A shown, white only B, and grey, equally blending between both of them.
However you can blend any of the 4 channels should you wish (Red, Green, Blue, Alpha), so for example only red parts on the texture blends, but here we only use greyscale, which will be shown further down.

More Color
This next part will show how to do the atmosphere glow, the 4 color component.

The main component of this part is the “Fresnel” node, this is what is used to get it so that it changes color as the angle gets shallower between the camera and object.
I don’t know how exactly the effect work, nor do I understand the equations behind it, it looks good so I roll with it

Now once we have the “Fresnel” node in place we’re gonna need two values, one to go into ExponentIn and another to go into BaseReflectFractionIn.
The easiest way I can describe how ExponentIn works is that it changes how shallow of an angle you need for the effect to be seen.

Extra info (kinda): So a value of 0 would mean you don’t need an angle you would see the effect all the time, but a value of say, 7.5 means you need a fairly shallow angle, in the case of a sphere, you would only see it towards the edges of the sphere.
Now as for BaseReflectFractionIn, I’m not too sure, it seems that low to negative values makes the gradient from effect to no effect smaller, I find having positive values covers the whole object with the fresnel, so I stick with 0 as to me it looks nice. Extremely small positive values also look nice, they give a more atmospheric look to it, for example, using the value 0.04425.

Next we clamp it using a “Clamp” node, this makes it so that any value less that 0 becomes 0 and any values higher that 1 become 1, alternatively you can set what ever the minimum and maximum is, this can be useful for other effects to, but hear it’s just to make sure there aren’t any crazy high values as we also use some nodes in this section to the Emissive Color.

After that we put our result into A of another Lerp with “Constant” node with the value of 0 leading to B, what goes into the alpha will be shown in the next part.

So from the Lerp, we create another “Add” node, with the remain value being used from the end Lerp in the Base Color section.
This will past the fresnel effect onto the texture we already had, and now we just plug the result into the Base Color input.

In a separate line, multiply the result of the Lerp by 2 and plug the result into the Emissive Color input.

Alpha & Movement of the Textures
In this section we create the alpha that’s used to blend between night and day as well as how the clouds and main earth texture is moved.

Firstly lets start with the alpha.

We add a “WorldPosition” or as it’s seen in the image “Absolute World Position” node. (I have no idea why the names are different)
This will get the X,Y,Z coordinates of the object the material is applied to in world space.

Then we use the “Dot” node to dot(?) the result with a “Constant3Vector”, what this will do is rotate the value with R=X, G=Y, B=Z.
We set the vector with a value of R:0, G:1, B:0, so it is rotated to the Y axis. It doesn’t rotate the way you would think, instead it in a way, points towards the axis.

From here we use a “LinearGradient” function and plug the result of the dot node into the “UV Channel (V2)” parameter.

The value is a bit high, and the gradient is too sharp, to lower it, we multiply it by 0.05.
It’s now slightly further back than we need it to be, looking all silly like, so we add using the “Add” node with a value of 1.

We then clamp the result so things are in a reasonable range and plug the result into the Lerps form the Base Color and the More Color sections.

Now for the texture movement, there isn’t much here, first we have a “TextureCoordinate” node, or as it’s seen “TexCoord”. The result is then split off to two “Panner” nodes for the Coordinate variables.
Then we create a “Time” node and plug that into the Time variable of both panners.

What this will do is move the texture (& UVs?) according to what you set the Speed X/Y values.
To set these values simply click on the panner and set the values, in this tutorial, for the first Speed X = 0.001 and Speed Y = 0, for the bottom Speed X = -0.003 and Speed Y = 0.
The first panner result is plugged into the clouds UVs parameter used in the Main Color section and in the next Specular & Roughness section.
The second panner result is plugged into the earth day/night UVs paramer in the MainColor and next section.

Specular & Roughness
This could be considered a color component, but I think it being referred to as the reflectivity component would be more accurate.

So starting with the specular, we need two textures, the cloud texture we used earlier and a specular mask texture.
For the specular mask to work properly, the land masses of the image would need to be black with the oceans white as white, should you have the opposite, all you need to do is plug the texture into a “OneMinus” node or as it’s seen “1-x” node and it will invert the image, so white is now black and black is now white.

First we add the cloud texture with the specular map, or the “1-x” result.
Then plug this bad boy straight into the Specular input.

The reason we add the clouds to the spec map is because the clouds don’t reflect as much as the ocean.

Now for the roughness, this bit’s optional, however I don’t like how it looks without it.

We use the spec map (though note, this time we need it the opposite way round, where the oceans are black and land is white, so you may or may not need to use the “OneMinus” node) and the cloud texture and blend them together using the “Add” node.
From that, we use another add node to add a value of 0.3, this will make it so that the oceans aren’t perfectly reflective like a mirror, but not also super dull.
We plug the result of the add to the Roughness input.

Result
And you should get similar results.

After a little of exposure change.

Would like mention the creator of the following video
UE4 Dissolve Materials
From that video I learned about the how to include world position data, of which I use in this tutorial.
The video is in, from what I can tell Russian, but the creator goes slow enough that you can easily add what he’s adding, plus he’s using the engine in English.

Perfect! And thank you for doing this.

Glad you guys liked it, I updated the “Alpha & Movement of the Textures”.
Now the way it’s set up, it’s easy to change where the change occurs in world space.

I would also like to apologize for initially putting it in the wrong place, didn’t even see this subsection, I must get my eyes checked, maybe acquire a stronger pair of glasses

But thanks for moving it nonetheless.

Bogie, as I am working at recreating this… I am having one problem figuring out how to create these nodes, what are they called? I’ve pointed to them with red arrows. Thanks. 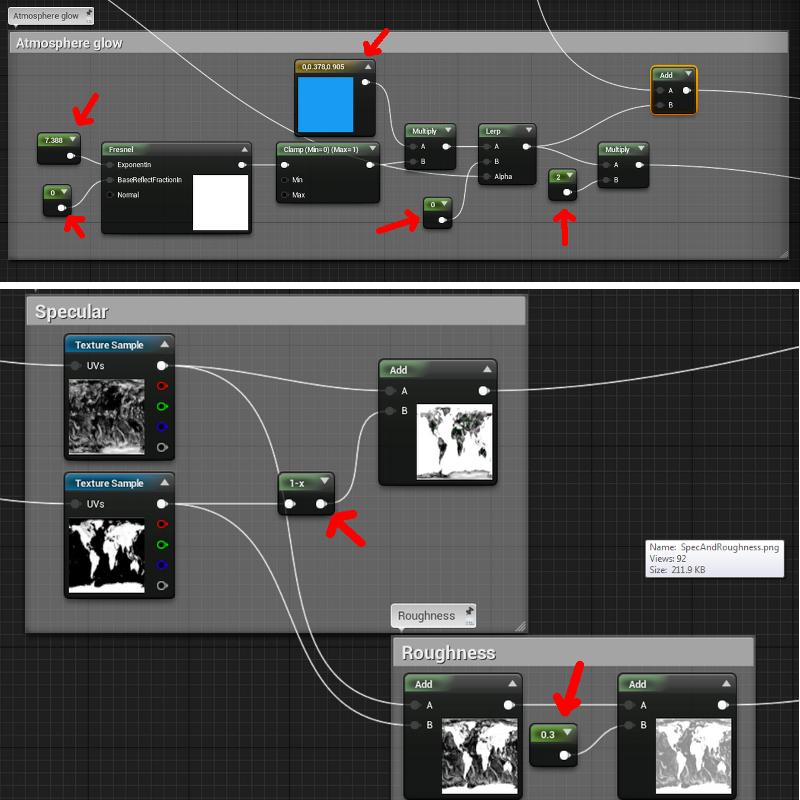 To extend upon what Mars007 said.

The other (slower) way of getting them is to right click and type or type in the palette on the right hand side (unless you have it different) and type “Constant” (single value) or “Constant3Vector” (3 values).

I am very pleased that the stream will be useful.
And it’s a great tutorial. Thank you bogieman

He didnt mention the resolution of the maps… I have problem to import larger than 8k textures. I need to get 16k + large textures on the sphere… is there settings for that?