Basically, I would like to do sidechain ducking.
I have set up an envelope follower on a submix A, enemy screams.
I have set another envelope follower one another submix B, player fire.
Whenever i fire, i want the screams to duck.
Right now, I can accomplish this, by having submix A envelope follower, control the gain of an eq, set on submix B ( a trick with the eq, is to set the bandwith to 10, then it controls everything).
This works fine.

Following this thread as I too would really like to be able to do this. I have moved across from using FMOD and having a compressor which is able to accept a sidechain input signal set up on group a.k.a. submix is undoubtedly one of the most useful things ever IMO. Probably the feature I miss the most when using UE4. If the submix compressor in UE4 does not have a sidechain input yet I can only hope that it is on the list of features to add as it is a ‘must have’!

yeah, I’m very tempted to strongly suggest using FMOD for the next project. (if we make a new project). Unreal audio engine is awesome, but it is lacking some significant things, for instance side chaining. And just a less convoluted way of manipulating audio via blueprints.
I guess Fmod is an audio engineers way of doing sound implementation, and unreal is a programmers way of doing sound implementation.

I have fiddled around now, and I cant really use this method for ducking.
I can control the envelope followers attack/release in ms, but it can create unwanted pumping effects, that I cant really control. On a normal compressor, I think the attack/release are more “pillowy”/soft, so you don’t get the unwanted side effects (har to explain). I really wish side chaining was built in.

Could set the built in envelope follower to 0/0 attack/release, then build our own bp system for making more pillowy acting values. Can have special release curves and all kinds of stuff. Would think we’d get far with the regular follower with slow release, and multiply other audios volumes by 0,3-1,0 or something. I did kinda like that here https://youtu.be/uVvJrKuCQiY?t=17

Cool!
Would you mind sharing some screenshots of the BP? Your system sounds much better. Thanks:) 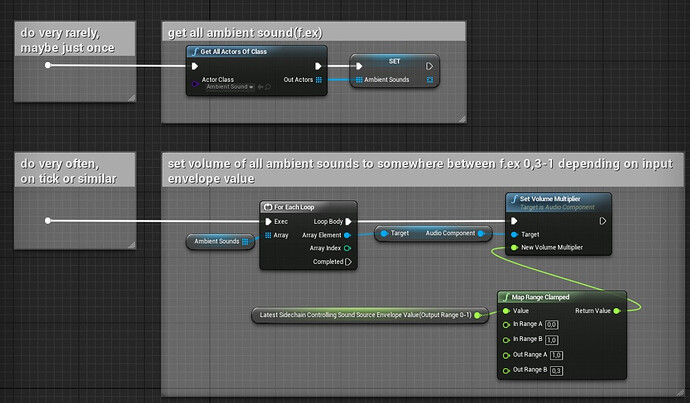 Couldn’t dig up the specific BP, so this is a mock-up. Would be easier to change the volume on a sound class, submix, or other groupings of audio, but here it’s just gathering all ambient sounds and looping through them and changing each their volumes specifically. The envelope output from a sound won’t automagically be in the 0-1 range, but we can use math and BPs to force that. Check out ArthursAudioBPs for examples of that!

Thanks. My programmer has currently made a compressor/ducker, in BP with sidechain (envelope follower) input, but is having a hard time to ease in/out of the desired ducking amount. (attack/release). Will post and example if we get it to work. How do you control attack and release? The curve in unreal bluprints, is not the same as a simple single fire curve. Basically I want to fire a single curve that eases into the desired value (amount of ducking), over time, everytime the audio signal is above threshold. And again, another single fire curve (release), that goes from the current threshold to the wanted ducking amount.
Its hard to explain but I hope you know what i mean:) 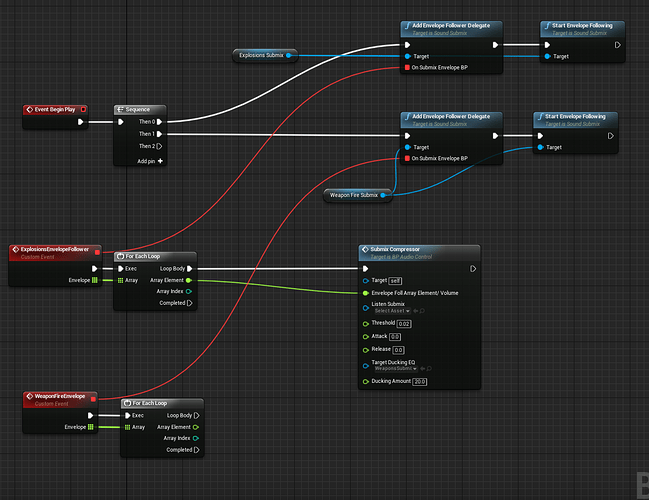 It’s a multitude of approaches that would and could work, but here’s one way: 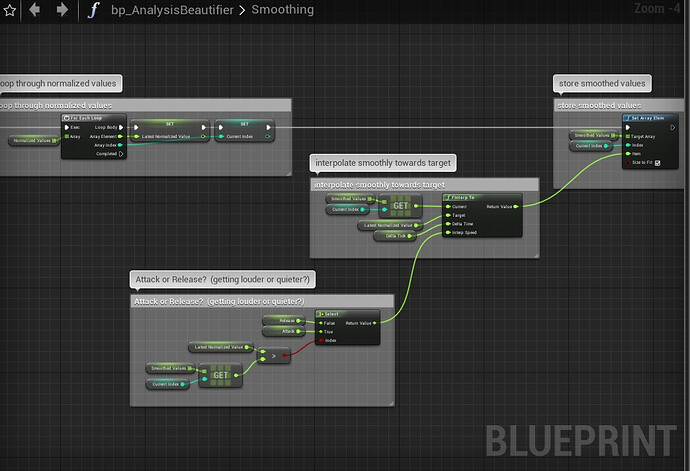