Should this respawn blueprint be causing movement/collision issues?

I’ve very crudely tried to create a respawn system using various tutorials. I’ve got it so the player will die, then respawn at my selected point. However, after the player has respawned and lands back on the surface, they are very low to the ground as if they have shrunk or are within the floor. The player also moves at a fraction of the rate they used to. I’m not good with blueprints but can’t seem to find anything in here which would result in this happening. 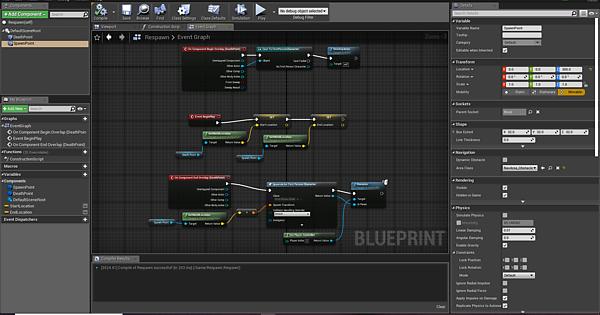 My alternate solution which worked for me: Imgur: The magic of the Internet

Are the spawn points high enough for the character to properly spawn? consider the origin of the character is in the middle of it. On a default character it would have to be like 100 z up.

Try splitting the Transform pin and only connect location, leaving rotation and scale at 0.

Thank you for replying. The spawn point is definitely high enough as they drop into the level after respawning. I have tried increasing the scale of the spawn point however this had no effect. Do you think I should keep pursuing this method or try and find another tutorial?

Thank you both for your help, unfortunately I wasn’t able to try that as I found a solution before seeing your reply that works for my game: Imgur: The magic of the Internet