Should i RIG in C4D or export first?

I was watching a fairly simple Car Import Tutorial
and this guy imported his car with no bones and later made the tires rotate and turn using the animgraph.

Im trying to import a plane i built in C4D. It is several mesh for each moving part 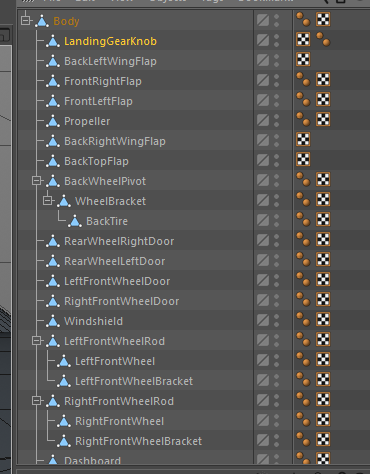 My question is… Should i Rig it out in C4D first… or can i just import it into Unreal and make it work?
Currently thats that i have done… but it goes into ragdoll mode when i hit play and everything starts moving around like crazy.

I need to have retractable landing gear
selector knobs to start the engine
joystic that is used to control the plane
spinning Prop
movable wing flaps that move appropriate to the joystick
and a throttle lever that actually controls throttle.

update… ive rigged out the bone locations… but im not sure how UE4 handles nul objects for root. 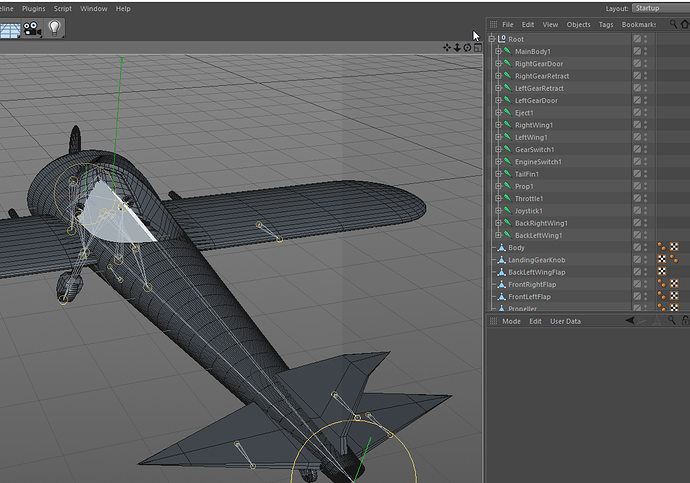 I think it can be made to work either way. The reason your mesh “explodes” is probably that you have physics bodies and collision for each object, and they may interpenetrate or be affected by gravity, and you don’t have joints defined that drive the movement of those bodies.

Personally, I’d rig it in the creation tool, and import it as a skinned mesh, because I find that to be easier to work with.

I think you need to read up on Unreal Physics more. It’s a pretty complex system, and you can do many things with it, but it does have very special behaviors, and is not just “drop and go” as you would do physical objects.

For example: Why would you think the tail would drop down, and not the front? What forces do you think are acting on the plane?

well… in simulation in the editor… the plane does drop correctly. The front wheels hit but the back wheels continue to go down as they should… I have a ton of objects that i believe are already have coliding meshes which might be part of the rag doll problem…

But i guess i would say gravity. which is selected