I am now arrived at the subject of inventory and shop system and not get ahead. While there are plenty of tutorials on YouTube for an inventory system, but as in the videos I have not imagined.
My imagination:

Inventory: It has listed a number of his items and you can as you want to equip. It has been the main weapons, guns and grenades. In the inventory you have on the left menu where the weapons in the categories main weapons (which I’ve already written) are divided, so if you, for example, only the guns are pistols clicks displayed in your inventory. This created so probably with a widget Blueprint. But I just do not know how to deal with the Blueprints “Programmed”. The

Shop: In the shop you can buy items for game points or real money eventually. If one has acquired the weapons are at one in the inventory. What I had imagined that one can find on a map boxes in the Special Weapons are there. These weapons can record with a key and then has them in its inventory. These special weapons can be sold in the shop for real money, eg for diamonds which you can buy for real money.
After each round played you get 2000 game points which you can then buy weapons for certain prices. However, it should not be so that the game points can go toward the minus side, so if you, for example, 5000 points has can not buy weapons for 10,000 points, but that would have to be clear.

Inventory/shops in games are simply arrays/lists of objects. They’re actually pretty simple to build, there’s no secret on array manipulations.
You plan to charge real money for items, good luck with that; expect ppl hacking your game(even if authoritative server setup) to have goodies for free, hope you have plans to deal with it.

Yes I had before , but I do not know how to create this and I find no tutorials . An inventory itself is not the most difficult , but where inventory items are added ( if you have bought the ) is for me already as good as impossible .

Inventory/shops in games are simply arrays/lists of objects. They’re actually pretty simple to build, there’s no secret on array manipulations.
You plan to charge real money for items, good luck with that; expect ppl hacking your game(even if authoritative server setup) to have goodies for free, hope you have plans to deal with it.

kinda nonsens for me, i heard some stories about substitution packages on some mmo projects, but they was pirate server projects with some java servers made by amateur programmers and their server desrtibution could be found in free access

Draw us some pictures for how you want your interface to look. Write some tooltips that explain what each part should do and we can start from there. 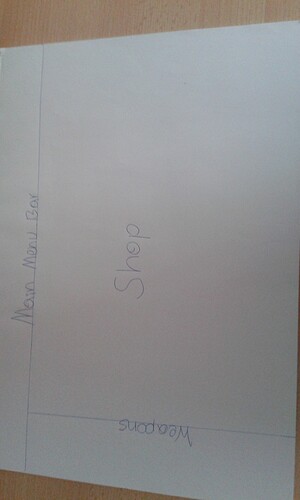 So above is part of a still belongs to the Main Menu, but we do not need here for. Below you can see the shop (so is the look like) and the side and the weapons menu, where you can select main weapon, pistol and grenades. If you, for example, only the guns are clicks guns displayed in the shop. The inventory the weapons chewed Exactly should also look, appear only in the inventory. With you can buy weapons, you get 2000+ points after each round earned. You can see the weapons for example, Diamonds (real money) to buy. If you bought a gun this is added to the inventory and you can also resell. But I wanted a shop or market making in which the user can provide weapons. Then I wanted it ever so make the distributed boxes on each map where there are 2-3 weapons that you can add to his game inventory. If the inventory is full you have to throw a weapon, it can pick up another player and then has them in its inventory.

You can still pick up weapons from the killed opponents , but with these you can only play and they have not been in its inventory . The weapons of the killed players I wanted to highlight red, so you can distinguish them. But this is no longer belong to this topic .

the design is real

kinda nonsens for me, i heard some stories about substitution packages on some mmo projects, but they was pirate server projects with some java servers made by amateur programmers and their server desrtibution could be found in free access

The (currently) only place you don’t need to worry about it is on current gen consoles, even iOS mmos are attacked and Android is a free fest.

cover up with example please
even more specific

Show me please, the example and evidence when blizzard hosted game Hearthstone, was hacked and people got access to paid content or can purchase items without actual currency. Would be perfect example, since this project represented on every single platform and your toaster.

Hearthstone’s card dust is still hackable, didn’t change much since we first tried.
(all I had to do was reverse the client to a Unity game project, kinda simple steps)
But now they simply ban you if you do, doens’t it’s impossible to do; just means you’ll get banned for doing it.

Hearthstone ‘trainers’ are still 100% working as well.
I won’t provide any links

a lot of this stuff are just keyloggers, but if you pay you find the real ones.
Anyway, I’m pushing the thread off-topic, so I’ll stop by here.

so,
1.there are ways to go over server authority, but server authority would spot you and stop your actions?
2. what is “trainer”? bot programs or programme which used for 1. ?
3. you already know how your arguments sound like?)))

, which is now a Hearthstone Forum :eek:.

your idea is generic and dont even developed as idea, everyone has such ideas in mind, they don’t matter
.
What im interested, is there are actual algorithm which allow hack tools to change the authority rules and their outcome on the server.
I’m not engineer and i dont have much experience with databases, so what im asking is, can bruno or anybody else, describe algorithm and pitch the idea how that gonna happen.
I see the transaction as:

So I must apparently Programming can

@CriErr make a popular enough online game with currencies; eventually you’ll meet “the asian power”.
Then you’ll see by yourself.

And for the last time, I won’t answer any of those questions.
Has nothing to do with private database access, it’s a business;
You are smart enough to figure things out; you just have to understand that online game cheating is a multimillion dollars **business.
**They will buy out someone from inside your company if needed. Just to have the data they need.
The good thing is, if they are aiming you: you’ve hit great success! Congratulations

Once you make a popular online game with currency, you’ll see ‘the asian power’ by yourself.
Diablo’s real cash Auction House was exactly a “-ok, we give up; can’t beat them, let’s join them instead…”
Fact is, people will hack your game. And they will win; every single time. You can only have business strategies to mitigate that and coexist them.

But you can simply ignore them and ban only the free open hacks. Those are the ones you must fight.
Paid cheats earn more the more profitable your game is to you as well because they charge monthy fees to use their tools.
Free open hacks are made to simply destroy your community. But there will be hacks, 100% of the time, no matter what you do… Just give up on that one.

I shouldn’t even replied to that. Now I’m out of this talk for good. Bye.