My name is Sophie and I am part of a Team of 6, developing our new game on UE4. It’s our very first experience with the Engine, and I hope that everything will perfectly work. I am pretty sure, that if I have questions, I’ll probably find people to answer me on this forum.

This month, we celebrate the 1st year anniversary of our first self-funded game: Epistory. We feel like it’s the right moment to announce our next game, in development, Shift Quantum.

Associated with the puzzle-platformer genre, Shift Quantum takes you through the mental maze of your brain in search of a way out. Who knows what secrets can be found behind cold and logical human thinking?

Shift was originally a Flash game series that has had many versions such as Shift DX and has been ported to iOS, PSP and Nintendo 3DS by Fishing Cactus.

The gameplay revolves around a room that is half black, half white, one of which is solid. When the player shifts, the room flips upside down, and the opposite color becomes solid. The goal is to get keys and reach doors while avoiding spikes and other objects.

One of the many challenges we’ll have to face will be to build an entire game based on 1 single cool mechanic and taking it to an entirely new level while keeping its original spirit intact.

With such a mechanic, the original games relied on a very simple black and white style; nothing in color and not even gray. In a nutshell, nothing that could interfere with the comprehension of the level.

Nine years after the first Flash version of the game, we imagined a Next Gen Shift game that has more to offer visually than its predecessors. More elaborated, the new art direction enhances the gameplay and creates a context for a richer story. 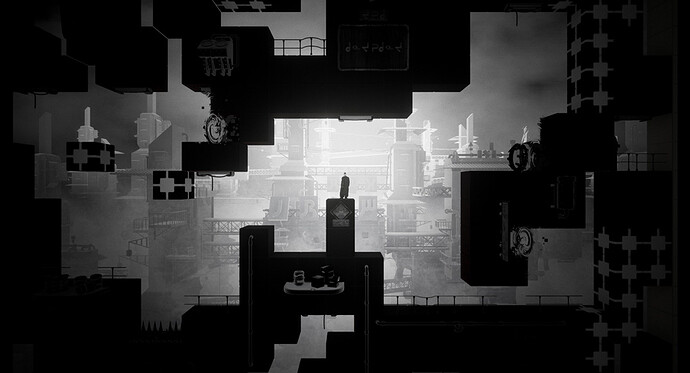 One of the strengths of Shift rests on the level edition. We already have something similar with Shift DX, but this time, the level editor tends to be more integrated to the whole experience.

The first steps were dedicated to the editor and not the game itself, creating an interesting approach in regards with focus and priorities. It was a reflexion from the ground up on user experience of the Editor. We’d like to allow the community to build levels that will be implemented in the story with the same tools as we used to create the game itself.

Even though we created the first prototype in Unity last year, to test the basic gameplay mechanics and help us validate the artistic direction, we actually chose to develop this game using Unreal Engine 4.

The reasons behind this choice are multiple:

I really like the muted use of…well…no colour! haha. It looks great. Also, nice use of refraction for the ‘portals’.

In this article, we will cover a few aspects of the systems implemented in the code base of Shift Quantum. From how blocks composing the levels are managed, to our command system for the in-game level editor, including how we generate those commands from the HUD, you will have a better idea of how we handle all of this in code.

Separation between model and the view

Because basically our levels are a grid of blocks, early on in the development of the game we thought it would be best to separate the data from its representation. This would have several advantages:

The model contains all the information related to the level, like the width and height, the current color space (Black or White), the rotation of the grid, or all the blocks coordinates. It also contains information used only by the in-game level editor, like the cursor coordinates and rotation.

The other classes which want to know when something happens in the model just need to subscribe to those events and react accordingly. For example, the level view is interested for example in knowing when the dimensions of the grid are updated, to adjust the boundaries around the play space, or when a block is registered, so the view can move the block to its correct location in the 3D world (because the model does not even know the blocks are in a 3d space), and so on…

One thing to note is that the model does not perform any logic when you update its data. It’s up to the caller to take care of removing an existing block before adding a new one at the same coordinates. More about that later in the commands section.

During the incubation meetings, maybe the first answer given to the question “What do you think is important to have in an in-game editor?” was an Undo-Redo system for all the operations available.

So we obviously had to implement a command pattern. This is a very well-know pattern, so I don’t think we need to dive a lot in the details. But if you need a refresher, here are some links.

Nonetheless, I can give you one advice: your command classes must be as lightweight as possible. No logic should happen in the commands, because the more logic you put inside, the more complicated it will be for you to handle the Undo and Redo parts of the contract.

As such, the declaration of the base command class is very simple and straightforward:

I think you will agree it can hardly be less than that. You may notice we don’t have a ReDo function, because Do will be used in both scenarios.

To execute those commands (and of course to UnDo and Redo them), we have a command manager component attached to our level editor actor. As you can guess, its definition is very simple:

And its implementation is a classic too. For example, the ExecuteCommand:

One function which deserves a bit of explanation is Finalize. You can see this function is called on commands which have been UnDone at the moment we execute a new command, before we empty the UnDoneCommands array. This allows up to do some cleanup because we know for sure the commands won’t be executed again.

For example, when we want to add a new block in the world, the command generator will spawn that block, initialize it, and pass the block as a pointer to the RegisterBlock command. When we Do that RegisterBlock command, we just kind of toggle on the block (make it visible, set up the collisions, etc…), and when we UnDo the command, we do the opposite (hide it, disable the collisions, and so on…). Finalize then becomes the function of choice to destroy the actor spawned by the command generator.

There are two things worth noting:

Because our commands are very simple, we need to put the logic elsewhere. And because we need a way to bind the generation of those commands to the UI, we created class hierarchy deriving from UDataAsset. This allows us to make properties editable in the UE4 editor such as the sprite to display in the HUD, the text to display under the sprite, the static mesh to assign to the cursor, or the maximum number of instances of a given actor which can be spawned in the level (for example, we only allow one start point and one exit door).

Here is an excerpt of the definition of this class:

For example, here is the editor view of a command data asset used to add a game block in the level:

Our command generator assets are grouped by categories, which is another UDataAsset derived class:

In the in-game editor UI widget, we just iterate over all the commands of the selected category, and add new buttons in the bottom bar: 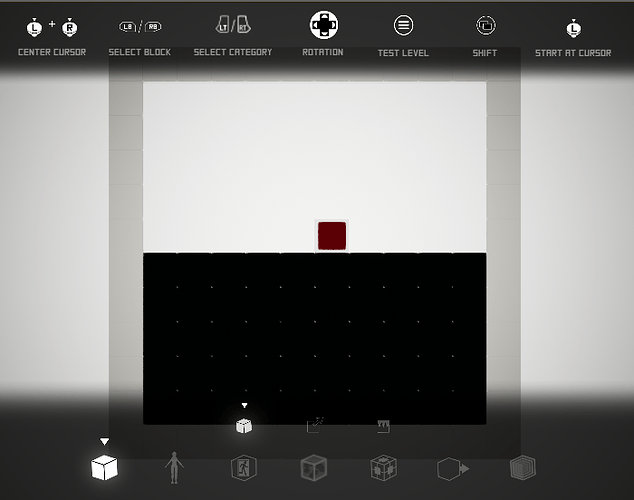 When the player presses the A button of the gamepad, we know the selected command data asset. Now, we just need to create the command out of this data asset, and give it to the command manager command:

To finish this part, here is the implementation of the command data asset used to register a game block in the level:

As you can see, there is a lot more logic than inside the various commands, because here, we take care of all the steps needed to execute a final command. As mentioned in the first part, the model does not perform any logic related to the integrity of its data.

It’s then up to the command generator to make sure for example that all the coordinates of the grid which will be covered by a new game block are first cleared up.

This can expand quickly, because maybe one of the coordinates to clear is part of another game block. Then the complete game block must be removed too. But as we can not leave holes in the grid, we must in a last step fill the holes left by removing this game block, but not covered by the game block we want to add, by basic blocks.

This gets really hefty in the command generator which allows to resize the level, as you can imagine. And this is where being able to unit-test the model comes in very handy. (VERY!)

That’s all for today’s article. We hope you found it useful, and helped you understand a few of the systems we currently use inside our game.