Very proud to have solved this problem myself without posting in forums or looking at documentation.
So I am sharing this discovery with everyone.
Sure a lot of you AAA guys already knows this

Collisions created inside U4 set at Complex Simple.
Lightmap resolution set at 128.
Texture image for entire ship mesh at 1024X1024. 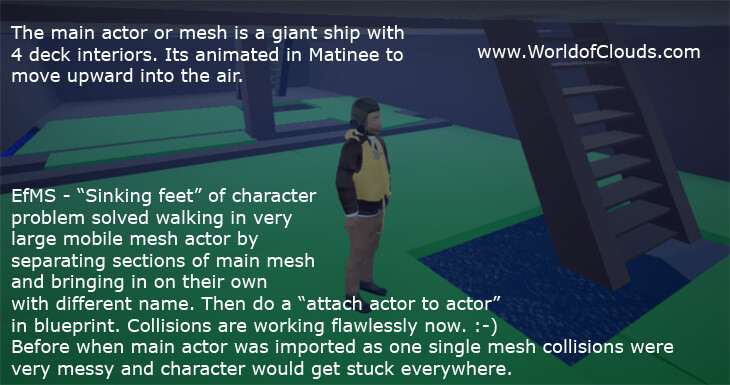 Problems with colllisions all solved.

Just to give a little feedback. Now that the ship is “in pieces” and attached rather than one big single mesh
collisions work 100% flawlessly. Character walks around the interior of the ship on all the decks and dont
get stuck anywhere and feet not sinking anymore. Part of the problem may have been that on such a large single
mesh import some of the UVies were inverted. That caused the sinking of feet I believe.

So it all ends well

You animate the ship in matinee and then walking inside?

You animate the ship in matinee and then walking inside?

Yip and it works great

That’s going to save me some time! Thanks for sharing!

That’s going to save me some time! Thanks for sharing!