I first did the tutorial: https://docs.unrealengine.com/latest/INT/Engine/AI/BehaviorTrees/QuickStart/index.html
then I wanted to learn how to do some of it in c++ and some of it in BluePrints.

As part of learning process and because I knew later on, I wanted some c++ control in this area.

I just wanted to share my experiences, as I wasn’t having much luck searching and here is hoping that someone in the future can find this useful.

Later on I realized, he did a few things you don’t even need too!

The first thing I wanted to do, was to convert my AIController class to c++
So instead of Follower_AI_CON as stated in the Behavior Tree tutorial. I made a FollowerAIConCpp base class (that inherits from AAIController)

In the beginning, I had this more sloppy approach 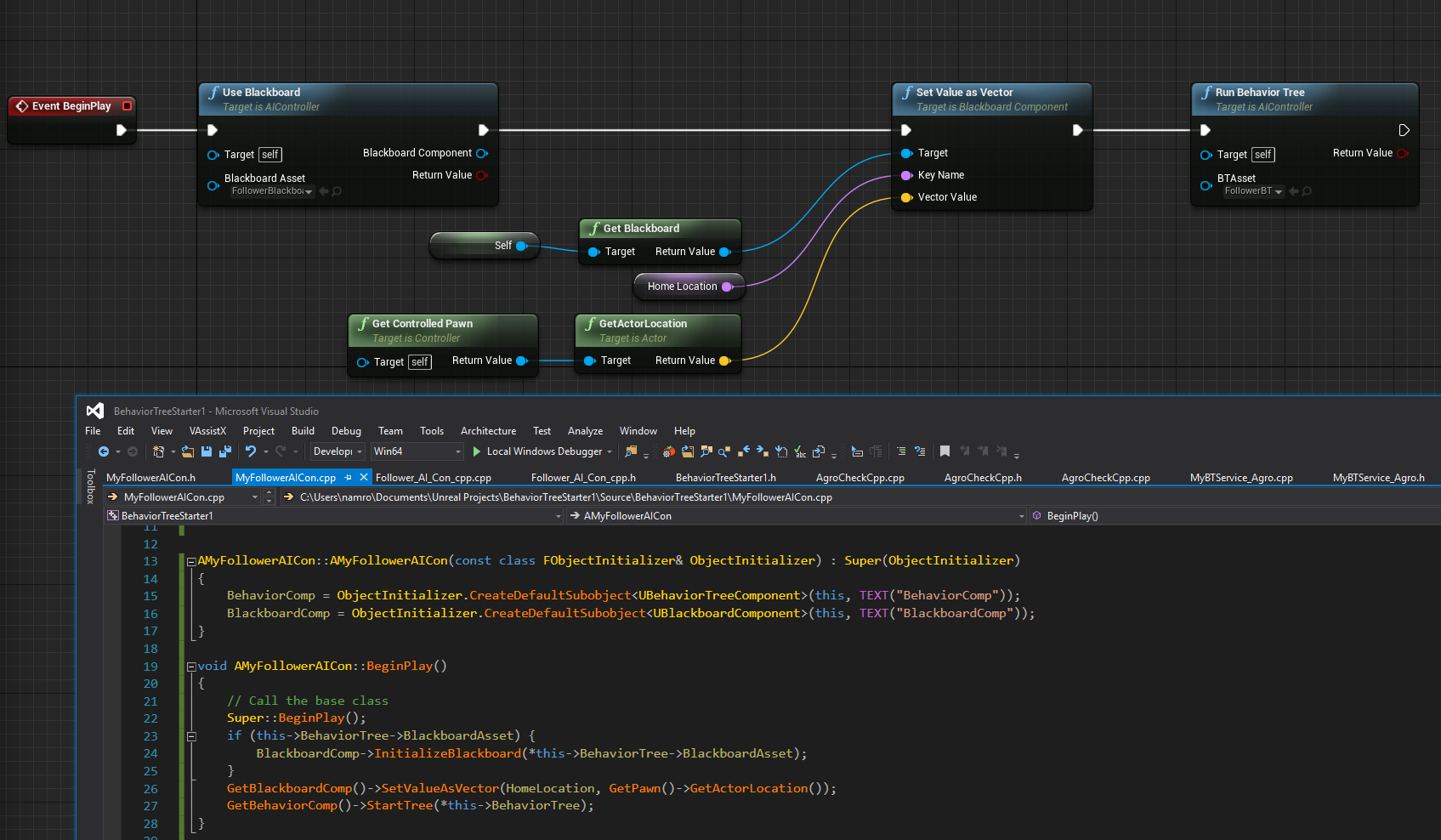 and later realized it could be condensed down to simply

If you weren’t inheriting from AAIController, you may need to make your own blackboard and behaviorcomp members, more similar to the Zombie one.

Since I still wanted to have both the blueprint AND c++ version run off the same Service,Task,Decorator. Yet in the original BehaviorTree Tutorial, they had saved a Reference to AI_CON_ref

The below is original way, The top is my new way
New AgroCheck: https://i.imgur.com/ytpQU7i.png

I replace all the references with OwnerActor>Target-Instigator>GetController

Alternatively, I could have likely changed the Follower_AI_Con to a simple AIIController or something, it all depends upon the behavior that you want! But this was enough for me, for now.

Then since I had my core AIBehavior in C++, the 1 thing it was missing. was that member variable for the Behavior Tree itself.

So I created a blueprint (FollowerAIConCppBP) with my new c++ class as its parent. And then I could set the Class Defaults Behavior Tree to the FollowerBT https://i.imgur.com/X794Dno.png
I know I can set the HomeLocation = “HomeLocation”; but I do not know how to get the BehaviorTree asset via C++ (any suggestions?)

Then I could make my animated character to have this new blueprint as the AI controller https://i.imgur.com/Chp5kum.png

For those who may stumble upon this later. It really is a good idea to search the github repo, by the blueprint nodes name (if you are following a tutorial) and see what they did or do. Perhaps you can call the same functions or mimic some of the behavior. I have found this to be still be a better resource than random internet searching still.