Setting up animations is impossible 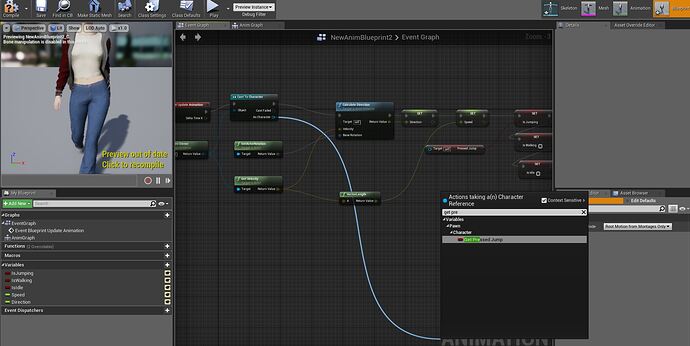 I want to set up a simple animation set with walking and idle animations, but it won’t work using the tutorial here: https://docs.unrealengine.com/latest/INT/Gameplay/HowTo/CharacterMovement/Blueprints/AnimBlueprint_Walk/

Sadly there is no “Cast to My Charakter” node. Got it deleted from the UDK?? I’ve used “Cast To Character” insted. It was the only node I could use

Also I only have getter and setter for one variable and not for the other 2. Even if they are exactly made up the same.

“Cast to My Charakter” node is not default. It was just named like you did.

If you want setting animation, maybe you should use “cast to” node in animation blueprint.
It’s process is like below.

No, this dosn’t solve the problem at all. Even if I cast on the “ThisdPerspmCharacter” there are still no other options than the “Target Pressed Jump” Node. All other animations won’t show up.