I’m currently trying to get physical animation-based hit reactions working through Blueprints, which I’m testing by having ‘Set Simulate Physics’ applied to bones below the spine when I hold a key. I’m using a custom character imported from Blender, based on the UE4 Mannequin. I’ve got foot IK set up and working as expected, and the physics asset simulates correctly in the dedicated editor, but when I activate ‘Set Simulate Physics’ (on bones below ‘spine_01’), the arms of the character mesh deform in a really weird way (see Character-Arm-Deformation.png). The rest of the character behaves correctly, including the foot IK (based on Alessandro’s tutorial here (http://unrealdevelop.byethost11.com/…acement-setup/).

The distortion remains regardless of the animation playing - I have an idle, a walk, run and sprint, the first and last of which are animations done on the custom rig, the middle two of which are the starter content defaults.

I’ve tried disabling all collision on the physics asset (i.e., between collision meshes), and several combinations of collision settings on my mesh and capsule. I’ve also tried deleting the character’s sword (in the right hand), but without effect.

Based on a lead from the Answerhub from ClockworkOcean to this post (https://answers.unrealengine.com/que…2951/view.html), I’m also interested in trying out the Mesh Space Ref Pose node in my Anim BP, but I’m not sure how I’d incorporate it, as when I substitute the Mesh Space Ref Pose for the cached Idle, the character reverts to T-pose while not moving. When in T-pose, the distortion problem is fixed, but returns as soon as the character begins moving again (i.e., using any animation, whether custom or starter content)

I’m thinking it might be something to do with scaling between Blender and UE4, or some other skeleton problem, but posts about unit mismatches between DCC software and UE described errors/distortions appearing in the physics asset editor on simulation - my physics asset behaves well in the physics editor simulations. 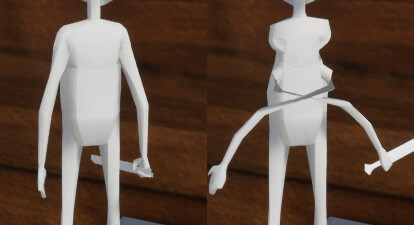 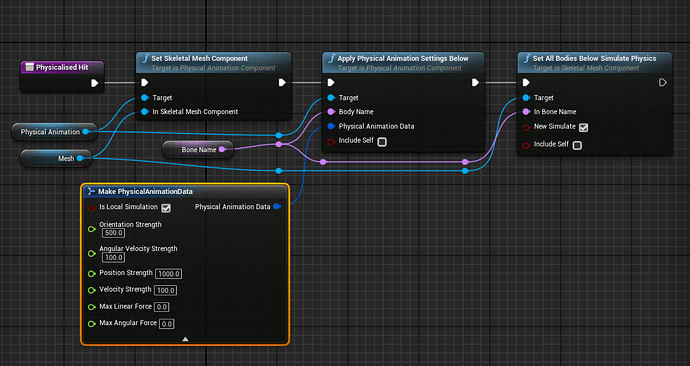 Okay, I’ve resolved this. My solution is at: https://answers.unrealengine.com/questions/922984/set-simulate-physics-causes-mesh-deformation.html