I’m not sure if it is a bug or not, but still want to report it. 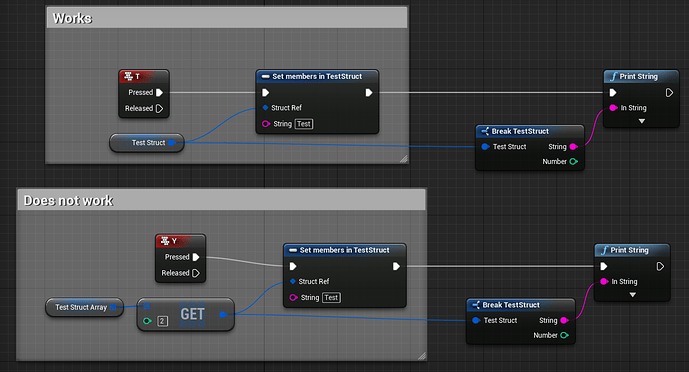 I know, that I can use Set array Elem. But in this case I need to connect all of the values like this:

But this is really bad way to work. What if I need to change only one member in many places? And if I add one more variable to this stuct, I have to connect it’s value everywhere I use such logic.

This is a known issue as UE-6451. Unfortunately I do not have a timeframe of when it will be addressed.

At least you know

Thank you) Hope Epic will fix that in the future.

But there seems to be a small workaround:

Confirming the workaround of assigning the struct to a local variable that will then be modified works.

The devs are still investigating this.

Just adding to Rasterizer’s comment. I tried this in house and it does seem to be a useful workaround for the issue.

Thanks for this workaround, bug still here in 4.11.2

This bug is marked as fixed in 4.12. While I cannot guarantee that it will make it into the final release build, I would keep an eye on the release notes on our Announcements and Releases section of the forums.

The issue is still being investigated by our developers with a targeted 4.16 fix version. Keep in mind that this is subject to change at any point as priorities shift and new crashes and blockers are discovered.

Omg awesome bug. And I naively believed that it is enough to simply pass the address of a member of the structure to a function))

Actually it is not… You can now get as a ref to structure, but not as a copy, wich works fine with SetMembers.

Does add to an array work though?

The problem is that set member in struct requires that a reference of a struct is feed in. So just passing a copy of that struct won’t do the job.
There is a get node for arrays called “get by ref” which returns a reference (shown as diamond shape instead of the circle on the get node). Or more elegantly put here is how it should look:

Note that you cannot use the foreachloop node since it returns copy of any array you feed into it.