Set Actor Location teleports players on top of it

If a character stands on an actor and Set Actor Location is run on that actor the character teleports too … I don’t want it to. Can this be avoided?

It shouldnt, can you show your blueprints? 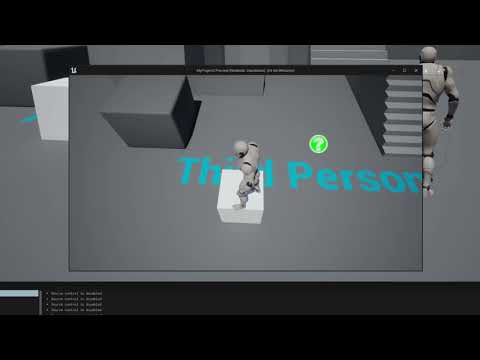 This was done in a new project in ue5 but the same occurs in ue4.26

The same occurs in 4.xx. I remember trying to get to the bottom of this and if I recall correctly even if you disable collision, the character movement component will still be taken for a ride.

Would like someone explained how to modify the component so it stops doing that. If it’s not the component that is to blame, who is?

Weird how i have never ran into this before, im tired so this may not be the best method but it works. and is fairly minimal Remember to set the collision back to enabled though

You were right it still pulled the character movement if i didn’t add that delay, if i ever figure out how to alter the component itself to fix it ill let you know.

I literally was about to write to enable/disable collision. Lol

You can use a Select node and toggle on/off before/after the setActorLocation. Don’t think the delays will make a difference.

The delay is just there to give me a couple seconds to jump onto the object before it teleports. With the code above, the object and the character teleport then the character falls through the cube.

AFAIK there’s no proper way to do it purely in blueprints (but I might be wrong).

Turns out adding a delay with 0 duration after changing collision is the only “fix” I can find.

Seems like mine and pezzotti’s solution is the only way in blueprints we found so far, otherwise you will need to do it in c++ like KristofMorva said. Plus a delay of ‘0’ shouldn’t effect multiplayer to bad.