If the meshes pivot points are in the wrong place, then you don’t stand a chance of course…

Hello, I have a problem with my imported mesh components position. I have a actor blueprint in my scene that imports static meshes into the scene. Actor Blueprints pivot point is set to 0,0,0, but meshes after getting imported are in the wrong location. When I try to get the world location of each imported mesh, I get 0,0,0 same as the actor Blueprints location, but meshes are not at 0,0,0 location in the scene after they are imported. Is there a way to set the imported meshes location manually? I came up with one solution and that was getting the mesh components bounding and then setting camera’s location to the mesh components bounding location, but the problem with that solution is that sometimes the imported meshes appear to be outside the sky box.

It’s a bit unclear. Do these meshes have the pivot points in the correct place?

Meshes aren’t made by me so I assume their pivot points are wrong and that is why they appear in another location than the actor blueprint itself in the scene which is set to 0,0,0.

Yes the meshes pivot points are in the wrong place. I thought of setting the meshes location by their boundings but haven’t been able to find a proper solution yet.

If you’re using a standard sky sphere, it’s pretty massive to start with. But you can just scale it.

Another thing you can do is move the pivot points. It is possible in the engine, but a little like pulling teeth and not accurate. You could also try: 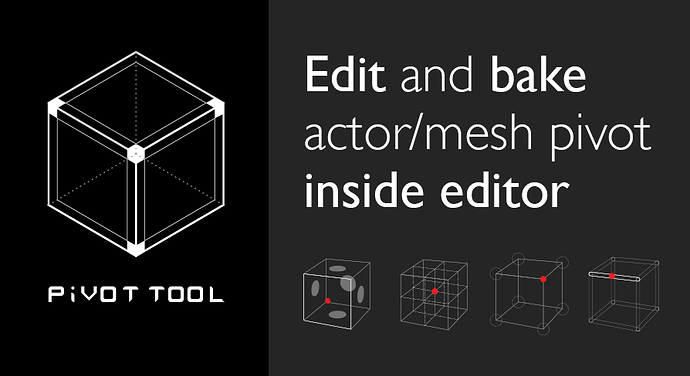 Pivot Tool is an editor plugin that allows you to modify actors pivot easily, and bake changes to static meshes inside Unreal Editor.

Second alternative, is to store the coordinates and transforms where you want to place them in an array. Not idea but…

I’m afraid I think correcting the pivots is the solution :-/

unfortunately that is not possible

Okay, do you know if there is a way to make the sky sphere size infinite like the post process volume that you can set its size as infinite?