When authoring a sequence it can be useful to take advantage of Unreal’s attachment system, but there are times when attachments cannot be created prior to the sequence, for example with Spawnables, or if there is some temporal element to when the attachment should be made.

Instead of scripting the attachment of objects, Sequencer provides Attach Tracks, which will automate the attaching and detaching, using the same mechanism (USceneComponent::AttachToComponent).

In the simple case where the sequence does not animate the object’s transform, this works as expected. We offer attachment and detachment rules for the sections so users can control how the object’s position is affected. 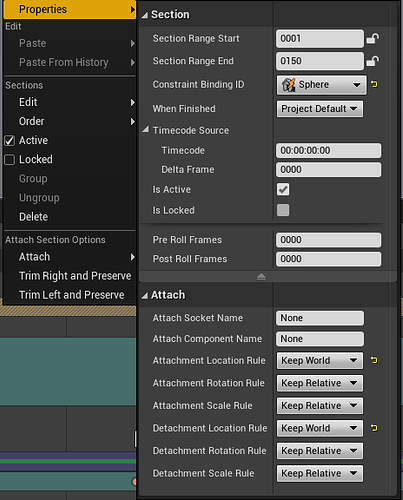 These can be applied to Locations, Rotations, and Scales separately.

However, when the sequence animates the transform of an object, the two systems will be working against each other, and these rules will not work as intended, since both are setting the object’s transform.

We have support for automatically counter-animating the transform when adding an attach track. These are accessed from the add menu and have these attach options available: 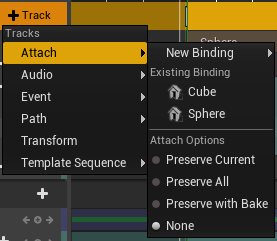 You can manually author your sequences to avoid this as well. If you set up the attach track, then animate the transform, you will be animating while already taking the attachment into account.

Another strategy is to set-up the attachment and then bake it into a transform, to avoid the systems from conflicting with each other. Once you have a combined animation you’re happy with, you can bake the transform from the Actions menu (wrench icon) in the Sequencer toolbar. You will need to have the binding selected. 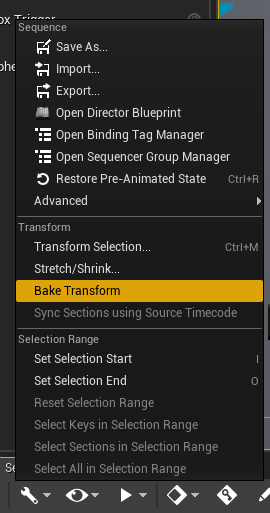 Do we have any method to limit the axes used in Sequencer? eg Attach X & Y only (no Z) [eg bool or float multiplier per axis]

I also noticed that the attach rules generally don’t take into account Socket locations (animated bones) eg “Trim Right and Preserve” sets the child’s Transform back to the parent’s component world coordinates without offsetting the current location of its selected socket/bone.