Seeking Talented Blueprint/C++ programmer and Animator for House of Demons

The game will have a very serious and dark atmosphere to it.

On night you get a a strange text on your cell phone from an unknown phone number. The message is just a house address. The address looks familiar but you don’t remember. You and your girlfriend decided to drive out there. Upon arriving you discover a massive mansion, the mansion of a large family that was reported missing only days ago. Upon entering the mansion you bot start to experience strange things and weird noises, you also think you see things moving in the darkness. As you both explore a little, you run into the slasher who chases you into a room. You later find out that the mansion was built to seal a hole leading to hell long ago. The people who own the mansion are related to biblical characters that have devoted their lives to keeping the hole sealed. The hole allows demons to enter the world in a physical body, which would allow them to take over the surface world.

In the game you will be able to craft items and you will need to eat and sleep to stay alive. You will be able to barricade yourself in any room you choose in the mansion, each room has its own perks such as item storage, amenities etc.

The demons are the only enemies in the game(Besides the bosses and Satan) Some of them can be viewed in the concept art below. The demons we plan to have are(These are working names, and not actual names of the demons):

The game will have RPG, Survival, Puzzle and crafting elements in it, with an emphasis on survival RPG.

1/1 CLOSED Animator - We need someone who can do good animation work AND rigging. We have 2 characters ready for rigging and animating. Knowledge of Persona will be very helpful.

1/1 CLOSED Blueprint Programmer - You must have a working knowledge of Blueprint, Unreal Engine 4, 4.9 and the ability to communicate with others and work together.

Things you will be programming:

-AI - We have a basic AI that Chases player, wanders around but it needs to attack player
-Fixing current Inventory System and Stamina system (making them work together)
-Create a Basic Stealth System

1/1 Closed UI Designer/Programmer - We need someone who can design good looking User Interfaces for House of Demons.

Here is some concept art we have so far:

We have decided to do something a little different with the game. We will make the game have game modes instead of a full fledged story for now. There will be many different game modes planned, so far we have kind of a hide and seek one going on. 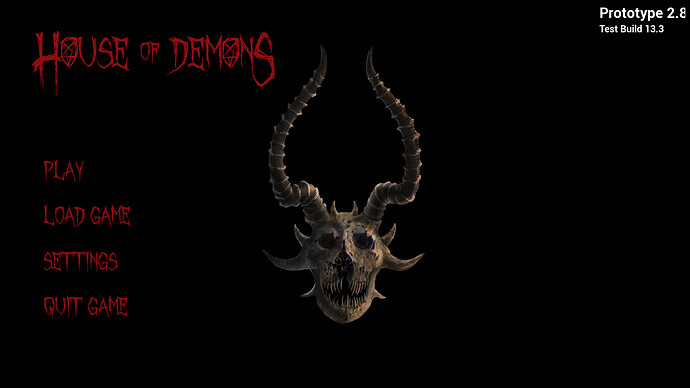 -Got new animations for Thin Man
-Stamina System Bug Fixes
-Grab and throw system working (Will be used as a part of the distraction mechanic, picking up and throwing objects to distract demons)
-All wings completed
-Added color grading to game to give better atmosphere
-Added options menu

-Assorted construction assets, refining of the mansion has begun
-Slasher is rigged
-Slasher has idle, running and roar animation (Not refined yet)

As of 11/28/2015 we currently have these features roughly implemented in the game.

-We have a few models made and imported into the engine.

-I have started the first pass at the HUD

As of 11/28/2015 we currently have these features roughly implemented in the game.

VERSION: Prototype 1.0
PROTOTYPE 1.0 INFO: This is the prototype phase of our game, and as expected will not be very functional or pretty, however at this stage we are getting everything we can into the game and then in the Alpha versions, will work on making them work and refining things.

I dont believe a day and night cycle needs much explaining, i’ts pretty obvious what it does

What you see in the photo is placeholder furniture made into physics assets. The furniture is movable so the player can use them to block doorways to slow down and prevent demons from entering their base.

We have a very simple AI at the moment. It randomly wanders around and gives chase to the player when it spots them.

Small walkthrough video. I cant reference the video locally for some reason so you’ll just have to follow the link, sorry about that.

It looks Like you arent making progress here and haven’t been in days. Maybe you should consider [CONTRACT/PAID] or check out other forums for developers such as Indiedb.

It looks Like you arent making progress here and haven’t been in days. Maybe you should consider [CONTRACT/PAID] or check out other forums for developers such as Indiedb.

Hi, unfortunately I cannot afford to offer a paid position to anyone. I have posts on 3 other forums, but I mainly post here for Programmers and blueprint programmers. I’m going to keep posting until i find someone though, no matter how long it takes.

Added an early rendering of the crawler!

still need programmers and animators who can rig characters.

Updated the positions and team area, now we just need a programmer!

I came across this post and see you’re looking for certain positions. Are you seeking original music or sfx? Studio Daisho LLC is a music composition and sound design company. We specialize in creating original audio production for various media platforms including videogames. We feel 100% confident we can deliver music & sfx for your needs. No project is too big or too small! We offer a free consultation, which allows us to know you and your project better. If this is something you’d like discuss in further detail we can be reached PM here.

Hi, Thank you for the offer, I will keep you in mind when we come to that point.

Looking for blueprint programmers! no need for C++. You will be helping to make the AI more advanced, fixing already existing blueprint systems etc.

Still need a sound designer. Must have experience creating a variety of sounds including but not limited to, UI sounds, Enviornment sounds, object sounds, etc.

Still in need of a sound designer for House of Demons, we’re making good progress and need sounds.

maybe you should change the thread title, it says you need a blueprinter/c++ programmer, but it seems you already have it and need a sound designer, so, should change to it to attract the correct ppl here.

Hi, I forgot about that thank youf ro reminding me, I changed it.

hehe, I mean in the thread title: “Thread: Seeking Talented Blueprint/C++ programmer and Animator for House of Demons”

Ah, I thought thats what i changed, I cant seem to be able to change it.