Whenever I go to change the mode for the sculpt tool (sculpt, flatten, etc) the menu will stretch up the length of the screen and get cut off just before the word “Smooth”, which makes the sculpting mode unclickable. Additionally the bottom most of the drop down menu will flicker oddly when it’s over the orange box for the height map. I have tried reinstalling the engine, and changing my screen resolution, resizing the program…I’m at a loss short of reinstalling the entire launcher. If there’s a keyboard shortcut to the sculpt tool(sculpt mode) I can work around it for now but I don’t know if there is. Sorry if my wording of the program is not correct, I just downloaded it the other day.

Edit: This issue was there from the beginning, it didn’t randomly appear after installing. It never resolves itself either, so that makes landscaping completely unusable.

I do not seem to be able to replicate what you are describing. Can you attach a screenshot that shows what you are seeing? 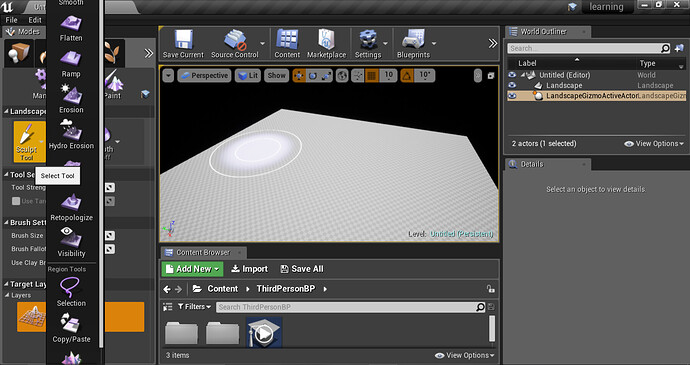 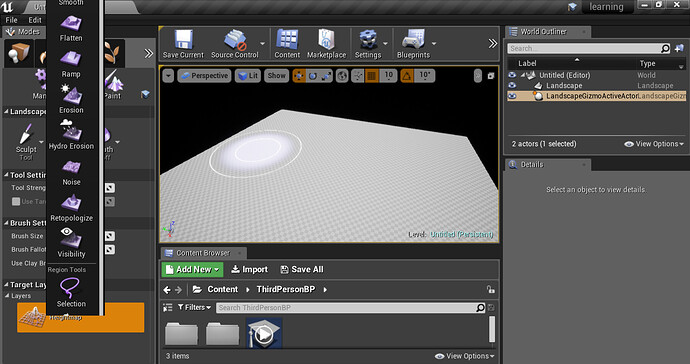 I have attached a version when it is and isn’t flickering over the height-map button.
And these are my computer specs in case you need them for times sake:
AMD - FX-6300 CPU
ASRock - 970M PRO3 Micro ATX AM3+/AM3 Mobo
Gigabyte - GeForce GTX 960 GPU
and 8gb of ram

Thanks for those screenshots. You said you have tried changing resolutions, what other resolutions have you tried? Also, in your Windows display settings, do you have “Change the size of text, apps, and other items:” set to anything other than 100%?

It is the size of text etc setting causing the issue. at 125% it’s still usable but taking up the full height of the screen and scrolls properly. at 150% it gets cut off. I tinkered with a combination of different resolutions to no effect. Every size after hitting a certain amount (150%, 200%) would cut off the menu. None of the other menus react this way.

Is this how UE4 normally functions? I scale my screen so that my eyes don’t strain on the smaller icons/text(and I have average eyesight). I imagine many other users also use the Windows scaling feature. Will UE4 look into adding support for it(if it is normal)?

For now I’ll live with scaling it while using the program as it responds easily to the scaling without having to be closed out or anything. But it would be nice to have it properly enlarged to make my eyes happy.

Well anyways thank you very much for the help! I’d honestly forgotten that feature in Windows existed

I am glad to hear that you are able to use it after reducing the scaling. I have also put in a bug report to our development team to look into updating this in the future to make the engine work better with Window’s scaling features.

Please let us know if you have any further issues.