Screenspace 3d widget only shows for first player in split-screen

Screen-space 3d widgets only show for the first player and do not show for the other players in split-screen. UE 4.7 p5

I was unable to reproduce this issue on our end. I have a few question that will help narrow down what issue it is that you are experiencing.

I have downloaded that project on multiple different computers and they all show the same problem.

Please let me know if you want anything else regarding this or if you are still unable to replicate this.
Rudy_Q February 10, 2015, 9:24pm #4

I was able to reproduce this issue on our end. I have written up a report (UE-9573) and I have submitted it to the developers for further consideration. I will provide updates with any pertinent information as it becomes available. Thank you for you time and information.

If you need to use the widget component in a split screen scenario, I’d recommend spawning multiple copies, and assign each one to the player it needs to belong to. You can do this by calling SetOwnerPlayer on the component, that will place it on that player’s screen.

If this is a case you run into a lot, I might recommend making a WidgetComponentSpawnerComponent or something like that, that automatically creates widget components for each local player, manages lifetime…etc.

I know that this post has been answered and is outdated by a year, but your answer is very vague, and I have not managed to find any solution for having 4 players with a text above their head on the screen space per screen in splitscreen. if you could elaborate on your answer, that would be lovely.

I ran through the steps above. After doing so I put in a request to be able to get the local player reference from the player that is created via the create player node. I have provided a link to the public tracker. Please feel free to use the link provided for future updates.

Thank you very much! I hope that they fix the issue soon, while it isn’t a super vital part of the game I am developing, having a way of tagging players in massive maps would be very beneficial. I’ve included a picture of what the issue looks like on my screen, though I understand you’ve done all you can. The picture below shows how only the first player can view the 3d widgets, including his own, the other 3 players widget components, and the 3d widget contained in the blueprint actor in the level. 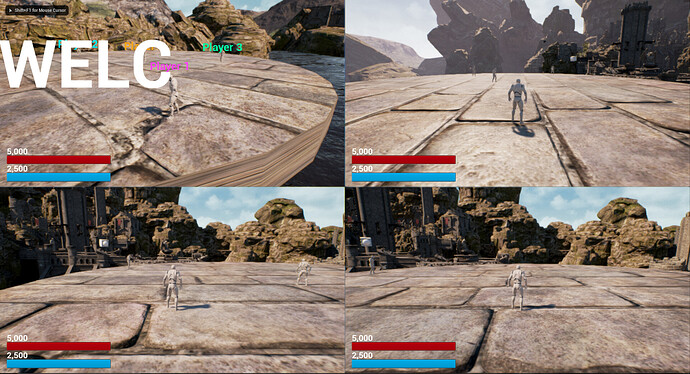 This is fairly old, but the problem persists and I was unable to find a ready answer. I did create a function in a child of UWidgetComponent to enable setting the owner by ControllerId. This did result in being able to control which player’s screen the widget rendered. I used this with widgetComponets that are scaled by distance to the player and created a component for each local player beyond the first as needed. I have not used C++ much in a long while so someone else will have to chime in if there is an issue with this:

There is still no satisfying way to do this using blueprint. However there is a workaround, albeit a bit cheesy. Since only widgets use the local player reference it is possible to get it from an already existing widget. All you need is the “Get Owning Local Player” node from a widget. An easy way to get one is to create a widget with the owning player of your choice (without adding it to the viewport) and then removing it as soon as you got the local player reference.