"Save the Earth" a space game prototype

Hi everyone,
I made this game or better to say this prototype in about 2 weeks from scratch. I wanted to create a content for my first complete course in unreal engine 4. But I’m getting involved with another project so I’m not going to hold this course anytime soon. Besides I don’t really think I’m going to continue working on this game anymore since at first as i said it was only meant to be a content for unreal engine 4 course for beginners to intermediate users and I have no idea what I’m going to do with this project at this moment. Here are some cool features:

I recorded the video while was playing inside the editor so recording in full HD on 30 fps, highly dropped game fps experience. And the video is quite large in size. Apologize for that. The game itself runs at worst 30+ fps at 150% super sampling (when sun and all the satellites are in view at full HD) on my GTX 980m gpu.
There are some points to mention like as you have noticed, game has sound like during space jump, shooting, hitting satellites, which we all know there is no sound in space since sound is a physical phenomena and requires particles to transfer it but I added these sounds because I WANTED TO !!
Cheers 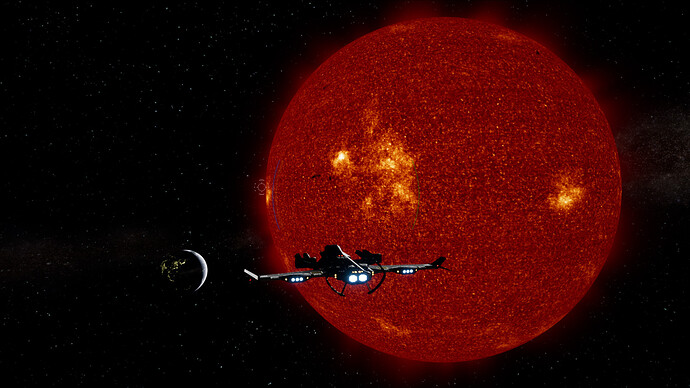 Hey Navid, Would you be willing to show me how that aim system works for a coffee? Went off on a bit of a tangent a few weeks ago and modelled me a sweet space ship, then I wanted to fly it so I followed a tutorial. now I want more "elite / Star citizen style mouse aim + flight controls, it’s slowly becoming a bit of a rabbit hole but its fine… Can you help?

Hi Vaughan.
sorry for late replay. for making an aiming system u need to know several tools in unreal engine and how to communicate with them. u’ll need to create the cross-hair material in material editor (make sure u set material domain to widget interface). for aiming, what i did was getting spaceship front vector > multiply it by a very high value like 1 million then convert that world position into screen position (u must do this operation per frame). there are two nodes in blueprints that do this for you just search ‘projection world to screen space’ or sth like that. then into widget blueprints try to access that point and use it to locate your cross-hair material u initially created in your widget space. thats all. Note that u need to offset the location by half of the screen since the coordinate location of widgets is different than the ‘projection world to screen space’ node that calculates it. u need to do some trials and errors if not sure about it. eventually you’ll make it work. Good luck