Wondering if anyone knows how to have the sap tap produce more than the default 20 stack?
I’m using a stack mod that increases the sap size but in the tap it stops at the 20 unless the tap inventory is accessed then exited, then it will produce another 20.
I would like it to keep producing over time as my modded tap has more slots.

The sap tap’s inventory is probably passively creating the sap resource that your stack mod overwrites. However, you’ll notice that inventories don’t craft your resource. You might have to make your own sap tap that makes your modded sap instead.

The tap does produce the modded sap, but for some reason it is limited to 20 at a time. If I let the tap generate sap it’ll stop at 20, but then if i access the tap inventory then exit (without removing the sap that is in there) it will add another 20 on top of the sap already in there.

This has only became a problem since one of the last few ark updates that changed something.

I do know it’s to do with the tap as someone has already overcome the problem an got it functioning how it used to/should with a recent update of their mod.
I put their tap in the tree come back few hours later and the tap is full (5 slots) of modded sap.

Default sap taps with stack mods do this.
I have the same issue with ALL stack mods and sap taps. Initially i was seeing 1k sap, then, I would open a second time and 20 would be in there instead of the original number

The reason this happens is because the Sap Tap does not passively collect sap, it calculates the time in between the inventory being refreshed (a player opening the inventory) then it divides that time by the sap collection rate and then generates that much sap. The issue this process is capped at 20, so it will never exceeded 20 unless the inventory is refreshed. The way to fix this is extremely easy. There is a node in the graph “Min (Int)” that has the cap set to 20, change it to a higher number and it will cap at what ever you want. For my Sap Extractor mod I did 40000, its an unfeasible high number and its also the max sap count for my inventory. 20 slots x 5000 stack if, moded stacks. 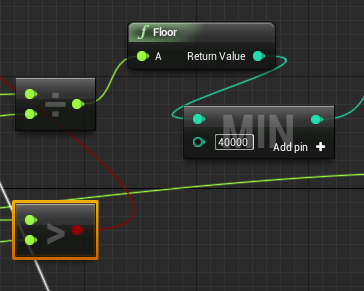 Ah ok thanks Firefox. That fixed it up an it now continually generates. I knew it had to be something simple that I had over looked.

One small problem left, it doesn’t generate the stack in the last slot fully. It will only produce 1 sap no matter how many slots the tap has.