So to create a realistic walking environment I want to create the real-life effect of stepping in sand and leaving a foot trail in the dune.

This would mean having to variate it based on the dune angle and the thickness of the sand based on material. The surface of the dune would have to be turned invisible in the spot the character is stepping. Once the player steps down it replaces that part of the dune into a small area of sand physics which interacts with the foot’s collision physics, pushing it into a footprint. Then when the player lifts the foot the sand physics object solidifies and becomes a non–physics mesh which stays in permanent save data. It can be switched to become a sand mesh again once the player steps on that circle again to combine steps together if the character decides to walk around the spot or step where he has before.

Of course as you might be able to tell I’m completely new at blueprints so I would have no idea how to achieve this nor the technical terms. I can understand basic code though. (In other words I kinda get blueprint’s basic concept, but not to the point I need). This also means my idea may need to have different techniques, obviously, like sand physics and mesh changes. I don’t know how taxing on the system it would be either.

If I could get help bringing this to fruition that would be great!

I’m new to BP scripting too, but to do this I would spawn a footprint alpha texture on the sand at each step with a particle effect, I think it’s the most efficient and less ressource-consuming way to do it instead of directly modify the mesh at each steps.

I understand that idea (and it’s traditional use), however it does not take into account angles, slopes, larger rocks, and most importantly foot position. In your idea, a character’s collision is too rigid in comparison to animation actuality. 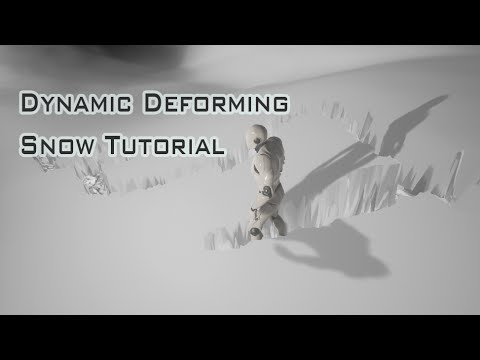 I like that, however it doesn’t have gravity applied to the snow nor does the snow have interactions with itself and it kinda just, disappears. Not very realistic.

I’m going for the most realistic land sand possible. It’s crucial to the atmospheric environment I’m implementing in my game so it’s got to look real. So far I haven’t seen anything close to what I’m picturing in any big-name game.

So here’s what I was able to come across eventually which would be perfect:
https://forums.unrealengine.com/comm…e-fluid-solver