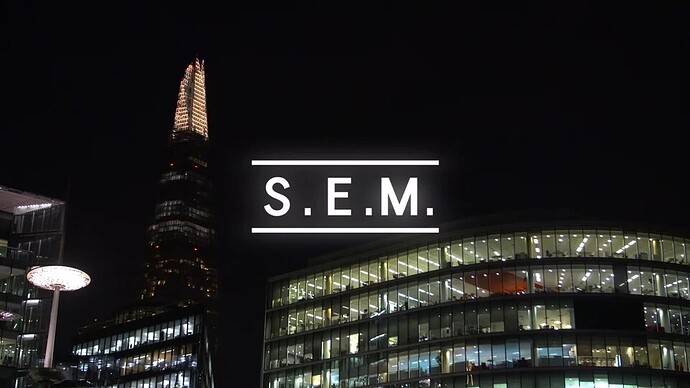 
Short description of the project:
**Automation through artificial intelligence and robots is slowly creeping into all sectors of the economy, permanently replacing jobs.
How will the future of work look like where shorter working hours,increasing number of freelancers, lifelong learning and reeducation are commonplace?
The gap between rising productivity due to automation and stagnating employment is bound to widen.

S.E.M. is a system driven by artificial intelligence intended to offer employees better possibilities finding future work before they get replaced.
With the use of big data, deep learning and generative algorithms, this process is tailored to the needs of each individual.
In the world of automation, artificial intelligence should help us find new opportunities instead of eliminating them.**

My name is Ciril Trček and I’m a student at University for Applied Arts in Vienna(http://www.dieangewandte.at) at the department for industrial design(id2). I’d like to show you my semester project called S.E.M. - stands for System for Employment Management. It was exhibited in the exhibition called Design for Agency at the Vienna Biennale 2017 at the MAK(Museum for Applied Arts) - - Vienna Biennale for Change 2021

About the project:
There was quite a lot of research going into this semester, starting with automation, not really knowing where I will land in the end. As it became more and more obvious that automation will impact our jobs in the future in a huge way, I decided to think of something that could alleviate the situation, by using A.I. and VR to create a system that evolves with your needs as you switch from job to job, that gets to know you better and that can help you in a more efficient way than a job coach could. A private space where you could discuss your future with the system, your options and the problems that come in each persons lives when they have to decide where they will work.

Fun fact: as I decided which path to take with the project and started to decide on how the interaction will be, Google announced at their I/O conference that they will be releasing an app that will help with job searches using A.I.

Why Unreal:
I decided to use the Unreal Engine in a relatively early stage to visualise the space where the project will be exhibited and then continued to use it through the design research phase. I used it because it offered really good results with really fast iteration times and best of all, it’s FREE. With an extremely limited budget money and time wise, you can imagine building a real life set was out of the question. I also only had a week to finish the whole thing after the research and design phase was finished, so you can imagine the time constraint. If I were to render this out in let’s say Blender’s Cycles or V-Ray in Rhino or Maya and something went wrong, the whole project would be at risk. Another big plus is that I can use this to iterate further and literally use the VR environment for testing in real life, to make a mock up of this scenario. In my first experiment(AI Viz on Vimeo) I used Amazon’s AWS Polly to generate the sound file, so some sort of real life mock-up would definitely be possible(I just didn’t have the resources and time).

Additional text(shown at the exhibiton):
As automation continued to drive the GDP of industrialized countries, the effects of this progress began to show. The gap between the rising GDP and the average real wage continued to widen and so did the gap between the rising GDP and employment. Even though early studies showed that automation displaced workers at an exponential rate, it was only after large sectors of the service economy began to be automated, that the real effect on jobs was seen. Job fluidity continued to grow, work hours decreased and the need for reeducation increased.

Job centers were unable to handle the number of displaced workers, who had to find jobs outside of their fields, where automation wasn’t predominant. Out of this need came a series of labour law regulations that protected the workers while embracing the technological advancements in artificial intelligence and computing power.
The regulations stated that a worker has to be notified at least 2 months before he will be replaced. The worker has the right to use a government system powered by artificial intelligence and connected to all job databases, learning institutions and government business grants. The worker is allowed to use this system for a minimum time of 6 hours per week during working hours. All companies that intend on displacing a certain number of workers must employ this system at their workplace. The system does not share any of it’s data gathered and all recorded data is accessible to the user. The gathered data can be transfered from session to session, from job to job so that the worker feels more comfortable as the system and it’s digital environment grow with it’s user. S.E.M. is one of those systems.

In the end, I would just like to thank Epic Games for making Unreal Engine, for making it free, for supporting their community and for pushing people to use it not just in making games, but in Architecture, Film and in my case Design!! You’re great!