We are working on a project where we need to snap one actor to another at a certain angle, and have the ability to rotate the object on local axes until it is oriented how the user wants it. Originally I was going to use sockets and connect one socket to another, then dynamically switch the socket that was being constrained. However, I noticed in Blueprints that there is no node that allows you to attach one socket to another. You can connect an actor to a socket, but not pick a socket on one object and one socket on another and constrain them.

We are relatively new to UE4 - are we approaching the problem correctly, or is there a better way? I’ve researched and the only answer that I have found is to create multiple models with their origin at the desired pivot point. Our project is very flexible, and we would love to be able to dynamically pick where to constrain on a single actor. 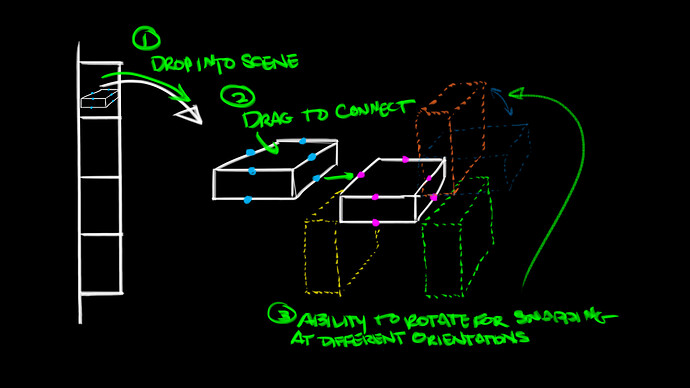 This shows a bit of what we are trying to do. The user drags in an actor from the side menu, snaps it to available sockets, and then has the ability to rotate the object from that pivot.

Hi bzundel, do you finally have succeeded in doing this ?

UE4 forums are littered with these unanswered questions. It’s so frustrating.