Hello,
I’m stuck at this

I hope my english is enough for explain this question;

For example when spaceship moves right or left, it needs to rotate from X vector 30 or -30 degree .

I tried tons of things but no of them works as expected.

This is my setup for YAW movement;

How can i achieve that?

I need that too …

Thanks for answers,
I checked Viper project but this is not i’m asking, i’m already using thrusters for movement, i just want to know how to rotate ship (roll for 30 degree) when using Yaw to sides, Just like the Everspace . Like ;

All distances from center of mass shoud be equal. for eg 100 unit to t he left and right, 100 up/down and 100 forward/back. This way all forces will act in same way.

Another tip is: make box (or traingular shape) for physics body. Make sure this mesh is symmetrical. Make it invisible, then attach visible model to it, but model should have no physics. This way you can have assymetrical visible model, all while physics works as intended. Asymmetrical physics model will result in spaceship drifting,

To move forward, you apply same force to both red vectors, to turn you apple +force to one of them and -force to another. Same with roll and pitch.

Now tricky part, you want stop rolling at 30deg. You can use math for it ie, calculate force to nullify momentum your ship has, its not trivial.
Or you can use angular damping, ie make it quit high just before ship rolls to 30deg (or when player releases button to roll urn).

PS.
I am not sure if you are making realistic spaceship turning, or its more like airplane in space.

In the ‘Yaw turn’ it might be easier to just fake the 30 degree Roll.
A reason to do this is just plain stability its trickier to fly otherwise.
But as Nawrot said, it all depends on the realism you want overall.
If you opt to go this route some of the 6DOF threads will be useful.
AddWorldRotation to Interp / SetPhysicsAngularVelocity for Physics.

Thanks A LOT for answers. I did exacly you said and i think i am at the right way. My Ship Pawn is :

Bu still i coudnt do the rotate ship with this setup.

Now ship rotates but when got 30 degree for Roll, ship goes up or down.

Am i doing something wrong?

Thanks for answers again ^^

I had problems with that too so I just used the set actor rotation node.

How did you use Set Rotation? I tried it too but when i set actor rotataion, and apply force to YAW thurster ship goes up or down, 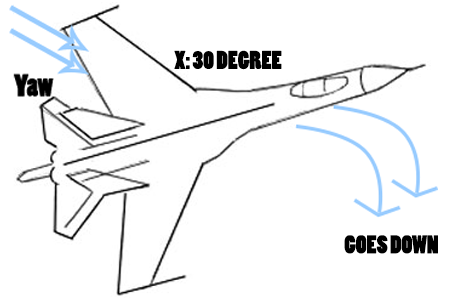 I solve this with animations.
I change Static Mesh with Skeletal Mesh, then made some easy rotate animations, and used them with Blend Space 1D.

If you want to solve this with just Blueprints you could have a node around your ship mesh that does the movement and rotate the ship mesh node inside independent of the movement to get the slight roll you are after. At least that is how I would have thought to solve it.