RootComponent does not include sub classes components

Given this class layout: 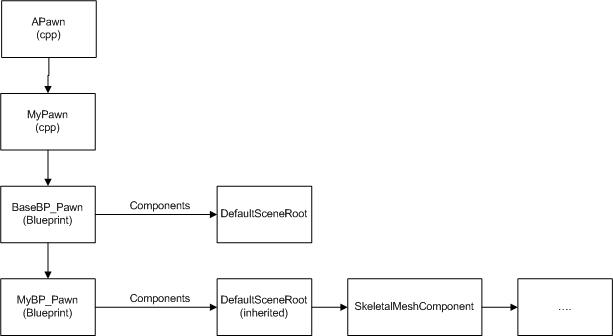 When we have an object of class MyBP_Pawn and in code, inspect the MyBP_Pawn.RootComponent member, it contains ONLY a DefaultSceneRoot for the BaseBP_Pawn Blueprint (I confirmed this by setting a unique tag on that componenet). That component has no children.

I would expect MyBP_Pawn.RootComponent to point to the entire hierarchy of components for the most derived class? (ie in the example above DefaultRootComponent would have a child in AttachChildren that contains a SkeletalMeshComponenet, …, etc )

It’s likely we are doing something wrong, but if not - any suggestions? I would expect the RootComponent to point to the Root Component set in the BP, and its AttachChildren to contain the children components set in the BP! I suspect it has something to do with AttachTo() or RegisterComponent() not being called correctly.