If possible could you guys please have a look at root motion again.
When testing internally please use root motions that do rotations in order to pick up any unexpected behavior.
Especially on both X and Y forward axis animations. Because i have this suspicion its due to my animations being fwd on Y and not X.

Or alternatively i will post the videos here as well.
The difference between 4.6 and 4.7

Alternatively if we can get the extract rotation data option back so we can disable it. This already will significantly improve root motion issues.

may i have your roll animation? :rolleyes:

Linking the forum and answerhub issues.

Hi. I picked up that root motion is somewhat problematic. My root motion is on a Y-Axis. And i have rotations happening. It seems it extracts the incorrect axis and starts going strange things. 4.7.3 In 4.6 it was working fine. Please see the...

Hi everyone.
Just wanted to find out if anyone has some good tips on aligning animations with capsule movement.

Right now i have a fairly complex solution of check if the slot animation is playing, on what frame it currently is… and then lerping the capsules position to a predefined position in world space calculated by placing the actor… going 1 frame, looking how much its suppose to move, save that vector, then do frame 2, and so forth until i “fake” root motion.

Any tips would be much appreciated.
Its also pretty much a nightmare animating and then having to remove all root motion from the animation before bringing it to UE4.

Deleted previous text because i felt it would hinder a solution. On point. 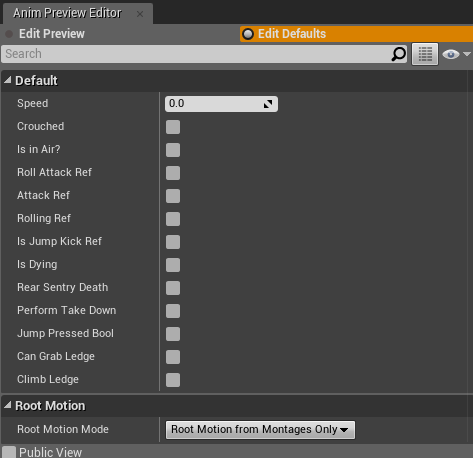 What am i missing? I read the documents…

Please bring this back

Create a branch point on your animation right at the end. Then trigger an event to move your capsule to the root bone. before the root bone has a chance to try and slink back to its evil master Mr Capsula

This isnt ideal but i was off for 4 days due to some bad bronchitis and i still am a bit grumpy. And i promised myself i would get ledge climbing working before bed time so i can implement wall running and pole vaulting tomorrow.

Yeah there are some glitches… but i can live with that until the root motion issue is fixed.

I discovered that this workaround is only ideal in some situations. When dealing with wall running it creates a whole new challenge as the capsule should ideally stay with the character.
For the time being i will cut advanced character movement out of my development cycle. Which is pretty sad considering level design cannot commence until the root motion bugs are addressed.

Or if i just make the game without the functionality to run up walls.
The other alternative is going back to older versions of UE4 but then i lose the vegetation shaders.

ok so i started digging again after spending another day creating offset logic for my animations to compensate for the fact that my root motion is not working.
1 animation is now taking more than a day to implement. Where a simple already animated jump animation should take 5 minutes to setup… its taking me over 48 hours.

I dug into the root motion example and noticed they have a root, and their hips are a child of the root.

Judging by the animation and skeleton it seems that the root is a point on the floor at 0,0,0 which stays there unless it is moved.
I don’t have a root root. My hips are my root.

Could this be why UE4 cannot interpret my root motion?
It would be really awesome if Epic or the community can comment on this. I went through the documentation again and it states no where in the root motion documentation that your rig must have a root on the root zeroed out.

This is just my root motion compensation logic… and its not even done and my animations are looking pretty much terrible due to not having root motion functionality. 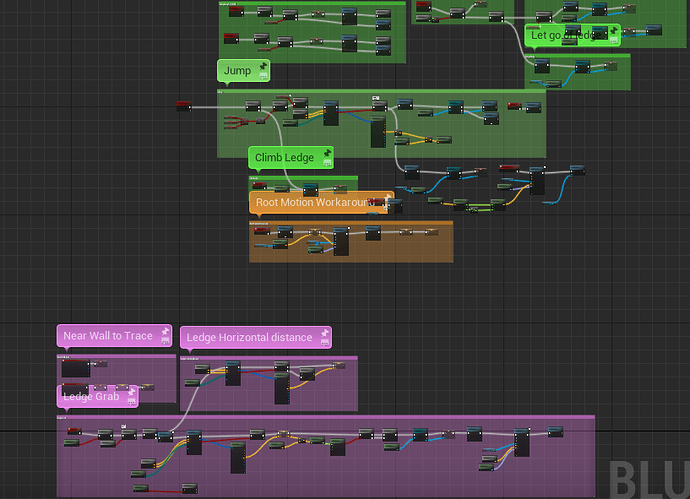 So after reading more i found that if you do not have a root bone at 0,0,0 things will go haywire. Perhaps i was just lucky in earlier builds with my root motion…
I cannot wait to test if root motion is working. I have spent the past 13 hours redoing all my animations after i designed a new rig that included the root bone.

Kinda feels like im in animation school. Making stupid mistakes over and over and finding myself deleting completed animations and redoing them from scratch after noticing a rotation problem…
Lord. All this effort is a 100 times better though than doing all the blueprint logic to compensate for root motion issues.

That is… if it works. I have not reached a point yet where i can import my new animations.
But soon. Maybe tomorrow. Hopefully. Will then post some feedback if root motion is in fact broken… or if animators who are noobs like myself… need to adjust their workflow and include roots, and make **** well sure you never rotate that sucker.

Hi Matt.
Im happy to report that the root motion issue was not a bug but in fact my noobness.
My rig did not contain a root bone, and i was using my hips as the root to drive the animation. This created some bad results.

I redid my rig and all my animations and everything is working correctly now.
Apologies for wasting your time.

Kinda duplicating the info on answerhub here. I have entered UEDOC-1460 (Documentation issue). To quote from answerhub, the docs issue is:

As far as a note in the documentation, there is a red box in the “What is Root Motion” section that states that the root bone needs to be at the origin. However, it then goes on to say in parenthesis “On the Floor”, which is not the full meaning of the “origin”. It could say “0, 0, 0 with no rotation”. I’ll submit this to our docs team.