Combat revolves around moment to moment actions that take place after a short time, where the result of 3 actions you choose via the circle of keys q/w/e/d/c/x/z/a will take place (you can see this taking place in the video at the top of the screen-a more visible circle of buttons will be shown in practice mode).
These actions are ‘punch left/bend forward/punch right/spin right/kick right/bend back/kick left/spin left’, and you can stack 3 actions on to one for more impact, for example 3 actions placed into a left punch will result in the strongest punch available.
This sets up a game where you can gain an accessible amount of control over your character in a physical combative environment, with quick lighthearted flexible strategy that’s fun to play with and watch.

This is being built completely in blueprint and is also an entrant for the #indiesvspewdiepie game jam at http://jams.gamejolt.io/indiesvspewdiepie.
The awesome music in the video is for this game and was created during this time with many thanks to http://kevingreen.bandcamp.com/,
and while I haven’t had enough time in this game jam period to do it proper justice the art style is thanks to this concept art created by http://robinkeijzer.deviantart.com/

I really hope you like what you see so far, there’s currently just over 24 hours left so I hope I can round out everything else that needs to be implemented in time like health and menus. If it’s well received I hope to also add more for a post-compo release.

While I was satisfied enough with the projects execution of concept to submit it to the #indiesvspewdiepie game jam, there were many things I didn’t have time to thoroughly test or experiment with. Now that the game jam has completed I’ve been able to spend my time working hard and thoroughly playtesting the game to refine each area of gameplay to a degree where I’m properly happy with it, and it is now reaching that point which I’m really pleased about. 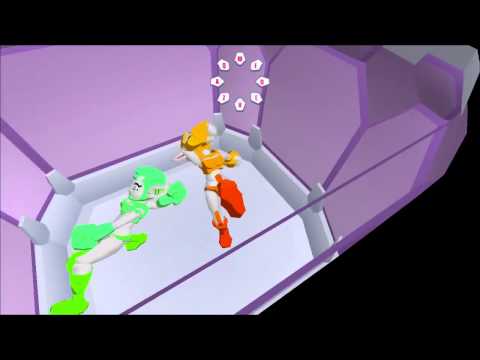 -Far easier to move around (especially turning)
-Better pose frames for enhanced combat experience (e.g. punch is more stretched forward than previously where it was curved, which works better now with the improved turning)
-Better physics workaround to keep players on the ground/not as floaty/easy to be thrown around as before-giving you a better experience controlling your character.
-Better pacing and method of input. Now instead of gameplay slowing down then speeding up again it has a reduced curve for this while instead pausing until you’ve input 3 actions (if you input all 3 actions before the ‘motion step’ it will continue smoothly). Later you’ll be able to choose between continue mode (where at each ‘motion step’ it will continue even if you haven’t chosen 3 actions) wait mode (it will wait for every player to input 3 actions) or timed mode (where you will have 5/10/20 seconds after it pauses to choose your actions before it continues-if everyone has input there actions before the time is up it will continue at that point).
-Better armor appearance (changed the way the armor looks for a sharper better appearance)

So now I’m really looking forward to rounding out the experience with health/damage/etc for its post-gamejam release :), hope that you like the improvements shown so far.

Thank you very much :D, hope you’ll get to enjoy it when the update is released in the future.