I asked if the Rivalry demo was actually using the ai to play Tappy Chicken during the stream two weeks ago and as I expected, they don’t. BUT they sure did make it look like they are. and it made me think, is this possible ? of course it is, this is ue4! anythings possible!

Soo, This will be my thread dedicated to the work in progress of me making the AI actually play Tappy chicken. That’s right the couch ninjas(ithinkthatstheirname) will face off in a tappy chicken battle for their lives. The idea is to have the couch ninjas standing at the arcade machine, both inputting separate actions to their specific chicken, if their chicken dies, a 1 ton egg will fall on the player with the lost chicken.

silly me i should have remade it from the start!

I basically rewrote the entire game using “conventional” methods, like a game mode, a character, level! This was needed because there was no real way to tie in ai at the level tappy chicken was created in. or atleast i didn’t feel like it was worth exploring any more options for it so i just remade it lol.
that texture will be drawn on the game arcade monitor, it’s real stuff in the level! I even exported the chicken and gave him a skeleton

[INDENT=3]**GOALS
**[/INDENT]
**MAIN GOAL :**Make it completely out of blueprints!
Current Goal : Finish the Q Learning Iteration ‘DumbChicken 1.0’ CURRENT
Next Goal : Add AI to one of the couch ninja to play against
**Future Goal : none
**
**Finished Goals :**Learn Tappy Chicken, Add a second player to tappy chicken and made it better, then deleted everything and started anew in a side scrolling project, Add Finishing touches on RivalryChicken2.0, start chicken ai, transfer ai to behavioral tree,
**[SIZE=1]
**[/SIZE]

Brilliant idea SaxonRah, i’m really looking forward to seeing how far you get with this.

Sounds like an awesome idea SaxonRah! It would be fun to be Watch the AI battle it out in Tappy Chicken. Good luck to you on accomplishing your goal and be sure to keep us informed as to how your progress is coming.

I pretty much have a 2 player system, basically there’s a bunch of bugs that i will fix like soon, but it’s the basics of a 2 player kind of play, there are two different obstacle arrays for separate scoring also so i can do separate logic for ai in the future. need finish allowing either player to continue on after one has died, also enable separate player egg collections

im thinking about scrapping the 2nd collision group positions and separate collisions and just pull the original locations and render them under the original obstacles so i dont need to worry about 2 sets of collision. probably that’s a good idea

I’ve yet to figure out separate collisions for the separate obstacle arrays, for now the 2nd array; they are disabled by def, you can enable them by hooking up a few things into the construction script and in the obstacle functions. The scoring system is firing endlessly after the first goal but im doing it intentionally and that’s easily fixed in the pan obstacles function just restore it to how it was before i modified it(look in another tappy chicken project),

scoring works for only player 1 with the normal obstacles and both players kinda, if you enable the separate player 2 obstacles the green chicken can score, but its nearly impossible to get em lined up,

both keys are configurable in input settings

also for some reason my logic got messed up on the player input section, its being all weird before i could control both separately but not it seems its messed up and you can do player one unless you have pressed player 2 oddd

before i upload and provide a download link, am i able to push this onto a public github ?

Looks like you have the framework building up for it already with your AI demo!

I basically rewrote the entire game using “conventional” methods, like a game mode, a character, level! This was needed because there was no real way to tie in ai at the level tappy chicken was created in. or atleast i didn’t feel like it was worth exploring any more options for it so i just remade it lol.

[FONT=arial black]**that texture will be drawn on the game arcade monitor, it’s real stuff in the level! ** 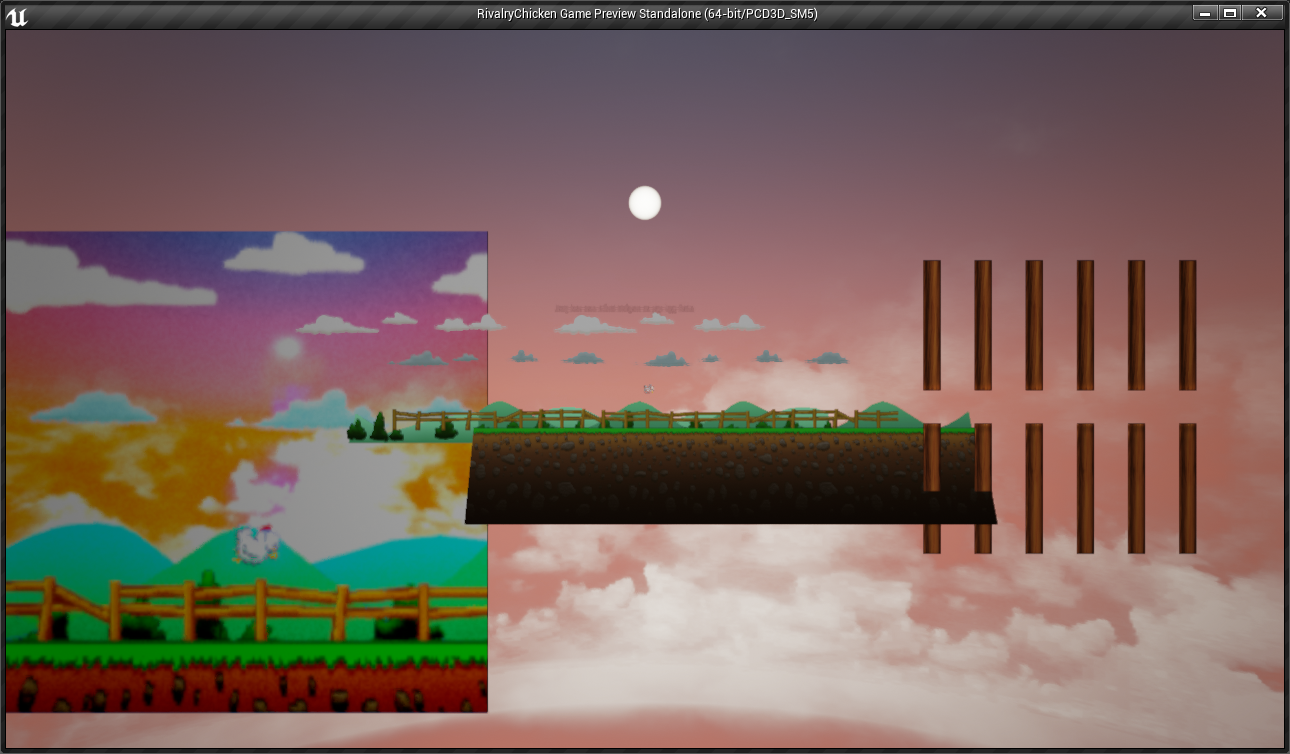 I even exported the chicken and gave him a skeleton

edit: Rama you have no idea how fun this is, restricting yourself to blueprints only, you can get so much done O_O!

edit: Rama you have no idea how fun this is, restricting yourself to blueprints only, you can get so much done O_O!

Actually I"ve done a lot with blueprints with clients and for Solus!

I like how you end up sort of visualizing your own thoughts! 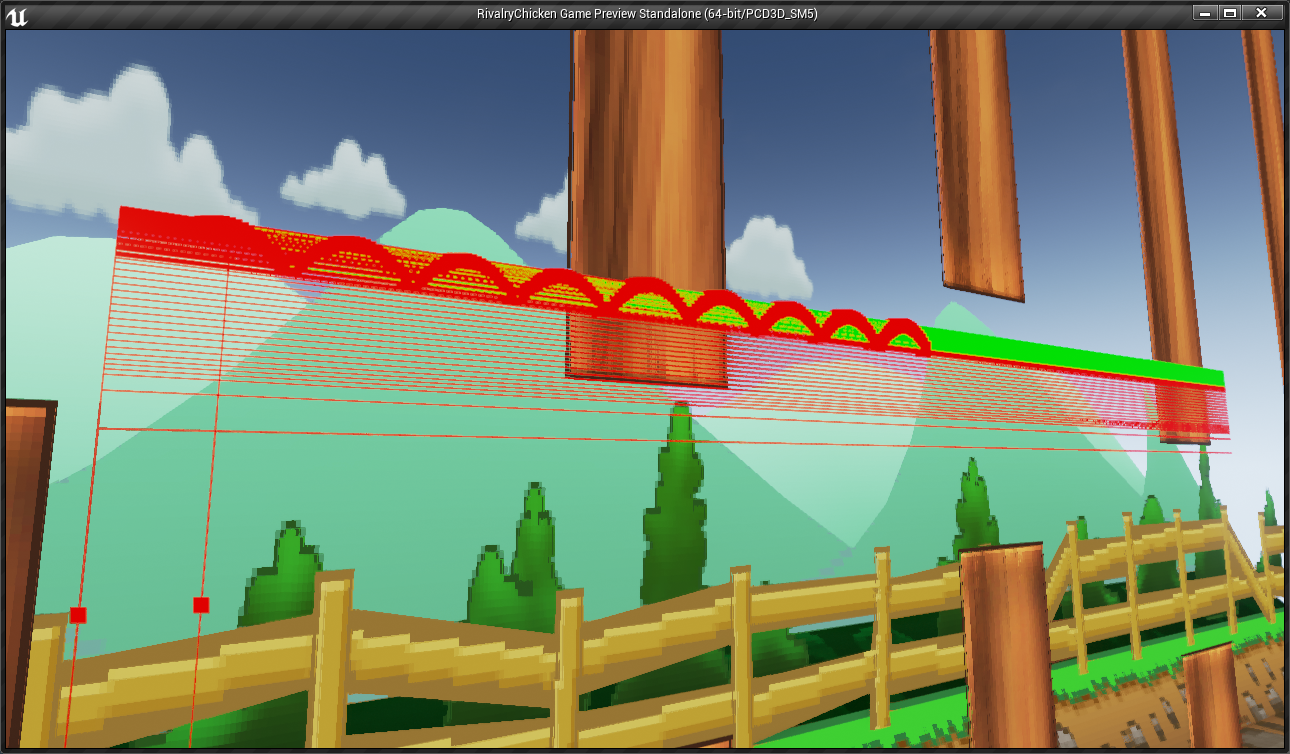 You’re getting there, looking good and keep up the work!

This ai is based off of reinforcement learning, it knows nothing of the pillars or the ground, it only knows about states ( being alive or dead ) and that it can either flap or do nothing, That ai is learning from itself from positive reinforcement.

It’s only been ran like 30 some times so it only knows of those times it played the game. it is dumb because it has not had enough time played in the game.

I don’t think it’s been clear that this ai is actually very advanced in-terms of machine learning.

wow this AI of yours sounds like a real AI, learning as it goes!

wonder if you can automate the whole process and leave it running over night!

so maybe on second thought

dont leave your computer on over night