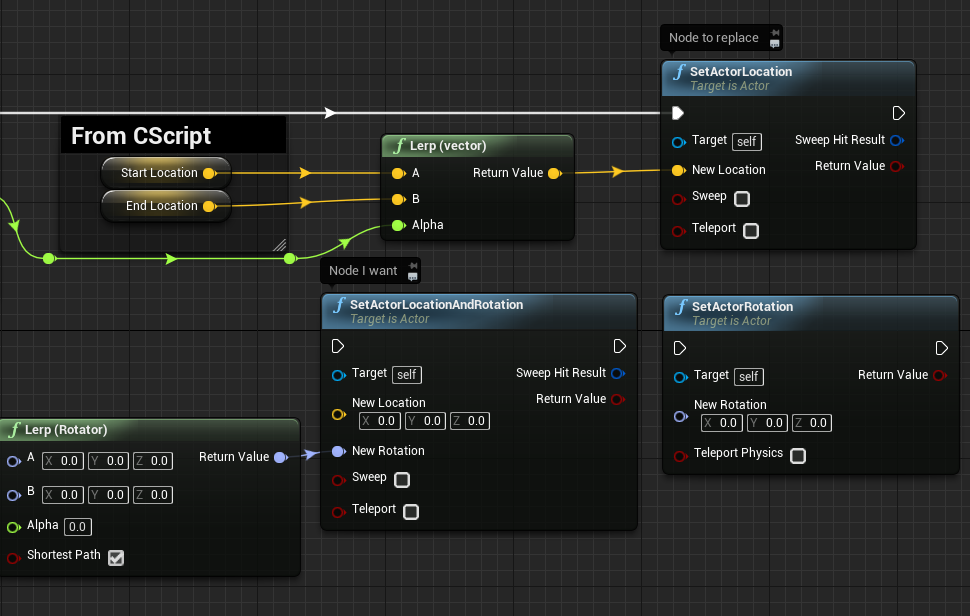 So I guess if you could include the search for BP nodes that is already done into that right-click context on nodes and allow direct replacement, that would be awesome! We already have one for variables, well that’s Find and Replace All. But, this one would just be for one node.

It would be nice to just be able to right-click on that SetActorLocation node and be able to just type in the node I want and it would replace it automatically, tying in the appropriate data pins together (so in this case the vector). Especially since there is already a search once I start typing, but it’s just for that node’s option.

In UDK copy & paste always copied nodes along with wires, whereas BP doesn’t at all.
So having an in-place substitution option like you suggest would be huge. Related to that…
Substituting BP variable-references in graph by right-clicking → ‘replace variable x with y’
This is great! But try doing that with Component-References and the option isn’t there?
Having all three working together, would be mega-helpful for blueprints productivity imho!

Cross-posting this to the: ‘Blueprint Assist Plugin’ thread… Can’t hurt…: )

you can check out this plugin,it support insert node and auto connect,I also plan to add replace node feature in the future:

You can use this plugin, which supports searching and replacing nodes:Home · qwaszxasas/AAA Wiki · GitHub