While exploring the export workflow from Rhino into UE project, I learnt three different methods:

Of the three methods, I do not know the pros and cons comparing between methods 1) and 2)? Are there any documentations or discussions on the topic? Please help.

We should split in 2 different questions:

3dm or udatasmith, it is about who is generating the data and where the control is.

I understand more on the topic now. There are so many ways that we can utilise to export Rhino files and it is so flexible. It is amazing. However, I hope that the documentation should include some of these explanations so that users can make the right choice when it comes to choose the export for the job.

Our projects handle very large geometry files with thousands to components sometimes. Because of this, I need to develop an export workflow that is suitable for our team usage. By the look of it, I may need to experiment with the udatasmith export as well.

By the look of it, the UE4 documentation have not update the fact that it can import 3dm files directly!
Datasmith Supported Software and File Types | Unreal Engine Documentation

Thank you very much on the detailed explanation.

with 4.27 you should get direct link between Rhino and UE. Allowing you to connect Rhino to editor or application and see live modification from Rhino in your application.

Is there any documentation on this topic available yet? I can’t get it working. Does it require any additional plugin?

I have not tried the UE4.27 direct link. However, in UE4.26, if one wish to use direct import, there are a few plugins need to enable. Have you checked if those plugins been enabled? Please refer to the screen dump (Those modules with red arrows). I hope this help. 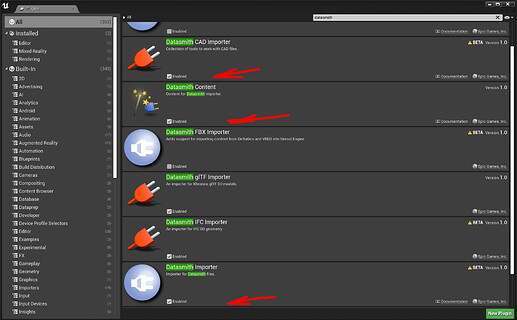 I’ve also been wrestling with this lately, and can’t get the direct link to work for Rhino 7 + UE4.27. Making things worse, I also can’t get the datasmith export to work. Only path at the moment seems to be datasmith import of the 3dm file, but it comes in a mess.

Which version of 4.27 are you using? Could you give some details on what you are trying to do and that is failing?

Did you use the latest Rhino exporter for 4.27 you can find here? Datasmith Exporter Plugins - Unreal Engine

Hi Flavien, thanks for following up. Yes, that is where I got the exporter, using the Rhino 4.27 windows preview, and UE is 4.27 preview 4. Rhino 7 is also fully updated. If I hit connections in the Datasmith Rhino toolbar, it says “No connection found. Waiting for a Datasmith Direct Link connection to be established. Please start an application supporting Datasmith Direct Link such as Twinmotion or Unreal Engine.” I have UE running at the time. Also tried with Twinmotion running. That’s as far as I’ve gotten with direct link. I’ve also found that my rhino model won’t export. I’ve tested with other simple models, and they will. But the large complex model that I’d like to export won’t. Whereas with a simple model, when I hit export I get a progress bar across the bottom while it processes, with the large model it just instantly completes and creates a ghost file. A “0 bytes” .udatasmith file shows up in the recent files list, but when I open the folder it should be in it is empty. I’ve tried troubleshooting, trying to identify what is throwing the export process, but still no idea. I just know that if I delete enough of the model contents, it starts exporting again. Is there some sort of limit on geometry content, or file size, etc?

The datasmith export issue with the complex model remains…

Hello Subtec, I double checked and at the moment the Direct Link will work only in PIE (play in editor) or in a packaged application. Connection into the editor is in our backlog.

OK, thank you for that clarification. What’s the intended use-case for direct linking my rhino model to a live game? Good to know that linking into the editor is on the horizon.

One of the main use case that is the product review session or any other custom application you created to analyse, view or share a model.
Until now you would have to export your model, load it in editor and then re-build your application or create a DLC for every model you want to see in application.
Now you have the possibility to try to load it directly.

Regarding the export failing: