Firstly I must praise the new sequencer modes and camera model, the new sequence mode was much needed and I am enjoying using it a lot. Looks good and flows well. I have only been working on it for a day now but I can’t figure out how to return to the player camera after a sequence plays. I either get stuck on the last frame of the sequence for the rest of gameplay or if I allow some end time to the sequence then the viewport switches to my character on sequence completion but it disregards the camera set up and focus’s in the actor itself. Like a first person view sort of even though I have no camera set up there (my camera is set up behind the character). Any assistance in returning back to the normal character camera set up from sequence play is appreciated.

Have you found a solution for this by the way? As I’m also having the same issue of the camera just getting stuck on the last frame of the sequence.
Any help would be greatly appreciated.
Cheers

I have also had camera issues with sequencer.

Try setting a custom/remote event in the persistent that calls setplayercamera or whatever you want to name it and call that around the end of your sequence.

I have the same issue with you. but when i try to add a new sequencer which is a very simple one in 4.13 UED, it works . I think the issue is about my sequencer because it is converted from matinee from the 4.10 version or even ealier. then I try to delete some camera cuts of my sequencers, it’s works too. so I have to remake the broken parts. in my advise, you’d better make some new sequencer in latest version. Hope that’s may be helpful

May you try to add your player in sequencer and put it to the end of timeline or other way your create an event in level and use event track to change viewtarget to player camera.

The way i managed to do it was to do everything according to this tutorial : Triggering Sequences from Gameplay | Unreal Engine Documentation

Except i triggered on begin play since i needed the cinematic at the start.

Then after the End event node, after i enabled input on the player, i cast to my character, and the through the get player controller i set up the set view target with blend, and plugged in my player character. 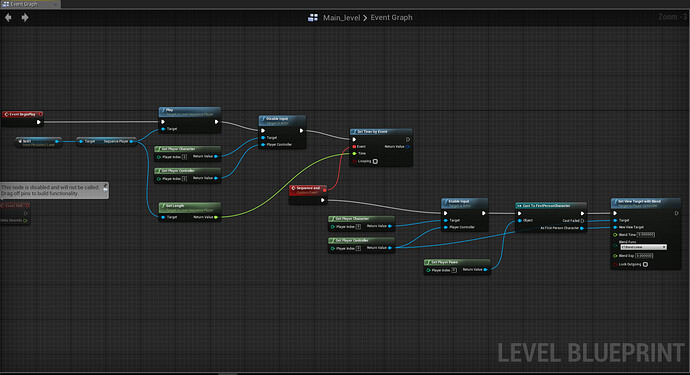 this is really helpful! thanks!

Thank you. G bless you.