I have added a dithering effect to the post process material but its still work in progress.
When this post process is final, i want to release a small game based on the retro gaming idea.

As for now, it can look good for rendering stills, but its not that nice when in game.

Edit: Update on the Dithering, now in the right place inside the material nodes. Looks great on dark parts. 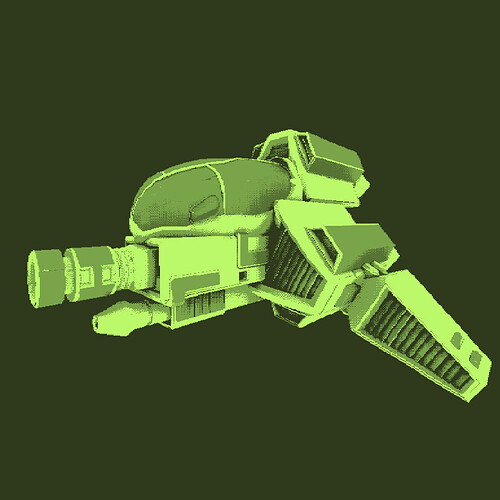 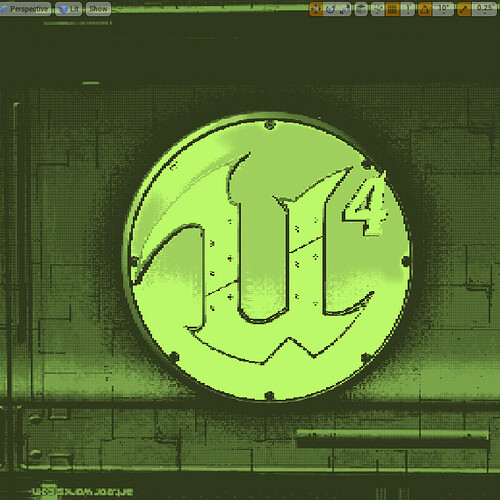 This looks awesome! I love rType, hope to see more of your project. Are you going for an original game or a rType fangame?

This looks awesome! I love rType, hope to see more of your project. Are you going for an original game or a rType fangame?

For this technique, it will be a small demo level. It is based on the Rtype setting yes.
I quess it will stay a demo for the postprocess material because i will work on an whole game like this after this is finished and it will be with the 2D sprite system. I just wanted to develop and research further on this post process to get the Unreal Engine to Render out these graphics with an easy set up just like the original tutorial and with 3D scenes.

What i want to archive is that lowpoly 3D models and 2D sprites can share the same look and aesthetics so there will be allot of choices to design the levels without beeing limited to 3D or 2D objects.
Greetings, Maternal

Hello again, today i will develop the full dithering effect.
For now it was only in the ambient occlusion pass, which is okay but only for rendering stills out. So i came up with the solution how to dither pictures, and made this Photoshop example :

The image is taken from Wikipedia Papageien – Wikipedia

This is my only task i can do today, but i want to work on the game itself the next days.

If its working i will explain how it works and maybe it gets added to the gameboy effect tutorial as well.

Edit:
Dither - Side by Side 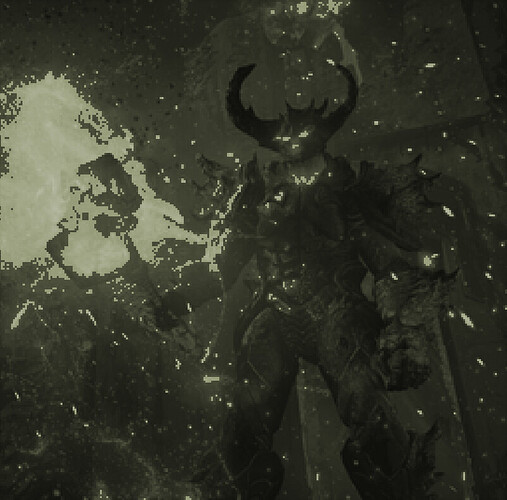 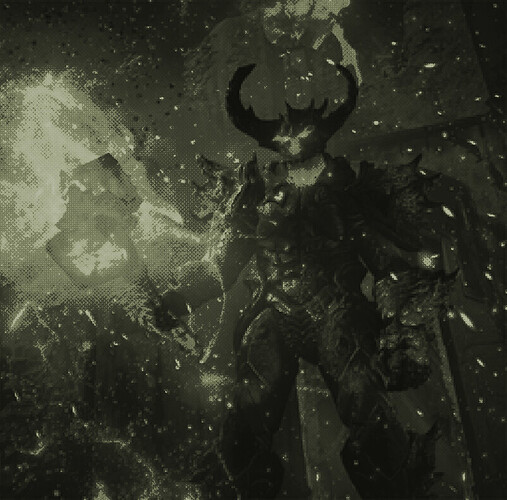 This has so much nostalgic charm for me it’s not funny. Nice work.

WOW! This is awesome Maternal! Brings back a lot of memories. I am going to have to give this a go around immediately. Fantastic work!

Dither was the next thing I wanted to add to my Gameboy tutorial, but got diverted on to other projects.

This has so much nostalgic charm for me it’s not funny. Nice work.

Sean Gribbin
WOW! This is awesome Maternal! Brings back a lot of memories. I am going to have to give this a go around immediately. Fantastic work!

I hope you will like the game when its finished.

Dither was the next thing I wanted to add to my Gameboy tutorial, but got diverted on to other projects.

Thank you Alan, so its okay to merge it into your tutorial ?

This will be awesome

So i have worked on it , and its pretty good for now. It fully works with gradients and with every settings, for now its only for grayscale color information on the scene color material node, but i will update it to be able to render dithering in color.
I have also build up a prototype of the game, but its very alpha.

i have a problem. I wanted to use the Impostor thing, but it does not work.

Select the desired buffer targets under Capture Settings; Make sure the High resolution screenshot window is open and the Include buffer visualization option is enabled; Play the game in a New Window, bring up the console using the ~ key and type rendertextures at the console and hit enter.

rendertextures does nothing.
So what can i do ?

Edit: Okay managed to get it working. The tutorial should be updated, because this console command above does not work anymore. I have not much time today, but i will show the workaround soon.

So why impostors ? I want to test how impostors or even single rendered images can be used to make a 2D or 2.5 D game. While the Gameboy didn´t had this big screen and hardware, i will just reimagine the feel of playing old games.
For now i will test this out further and decide what looks best for the Rtype demo.

By the way, Impostors would work great to reproduce this grafics :
https://www.google.de/search?q=Virtualboy&espv=2&biw=1280&bih=963&source=lnms&tbm=isch&sa=X&ei=yHA1VIm0OYW-PYXmgdAC&ved=0CAYQ_AUoAQ

in case you are waiting i planned to work on this project this weekend. It will probably reach “beta”. So to bump this thread a little up here is what i have so far

I will also use Famitracker to make sounds for the game, so it will be very retro. But because i am not a sound artist, it might not be the correct sound for the simulated mashine. I really like the Amiga and Amstrad Music and Sound, so even if you have the Gameboy effect on it will sound like the Amiga/Amstrad unless (!) someone want to jump in and create music or sound for this.
This would be interesting, because then this would then be a community project/tutorial, and i really like that. What would be a great idea is that you can change the simulated mashine at every time (during pause menu), this would technically be possible by now.

And after i thought a little about it, i guess i want to release this demo to be full available to the community. But i need then polish it out and rename and name everything correctly this might take some time.
Greetings,

I want to play Rtype remake

You are using UE4 engine rendering and shaders to have a beautifull image , and you add another process to downgrade the image to gameboy color. Does it makes sense to use so much post process to get simple graphics at final ?

I want to play Rtype remake

You are using UE4 engine rendering and shaders to have a beautifull image , and you add another process to downgrade the image to gameboy color. Does it makes sense to use so much post process to get simple graphics at final ?

Well not so much. Personally i would now draw sprites myself, after i have learned so much through this. But what will be covered and what i try to do is that i render out the final image from the post process and the scene to sprites. So the Unreal engine is used like a Render program for this. It can´t replace an 2D Artist, but it can look good to be happy with it - that is the goal for this. Just to get creative with everything.
On the other hand, what can look good is a 3D hybrid but then we are close to snes grafics and amiga. It would be possible that it looks like F-Zero even if they are 3D meshes.I also tested out impostors, it has the right look - it looks like the snes mario kart or what they used in Doom.

Okay, i am ready to work now

Hello again, weekend is over (for me ) and i can share the newest WIP with you.

It was a very experimental work- it didn´t worked as i thought it would. There are a lot more things that would need to be done on another way and in a better way.
So its somehow a drawback and some development for me. Everything you see here is rendered with to Unreal Engine - to sprite sheets. So with this setup, everything that was produced by the post process is baked into the texture. This is the actual drawback for me, because i wanted to have it more dynamic (change the colors or the bit-rate).

So i have to take more time to research better solutions, however it is a result for now.
On the other hand, building real spritesheet blueprints would be much more efficient. I guess this retro postproduction thing will be more for the fun than that its actually a solution to the retro gaming setup.

Have a nice weekend,

Your work here looks so good! Though I have to admit I was hoping to see more of a 3D take on the gameplay due to your first few screenshots.

@finiteBytes asked about this effect too. I found some spare time and archieved this for now :

I am in a hurry so i will share more informations later.

This is pretty neat. I’d love to know how you achieved it

Dither and Pixelization on :

Okay - i have tested this through alot. I found the best way ( and perhaps the right way also ) to do this. This is from the Feature Demo

My plans of releasing this is using Gumroad and make it available for 0+ ( so its free but if someone wants to donate its possible )
Hope thats fair / okay .