[Resolved] Please turn off Auto-Compile when I add code to the project.

I’m sure this was only meant well, but actually re-compiling code as soon as I add some to my codebase is really annoying, like I just want to get on with programming straight away, but I can’t do anything until it’s either finished or it fails.

A lot of the time I don’t want to compile straight away. Can there at least be the option to turn this off?

I completely agree, it’s especially annoying when you want to add a whole set of classes back to back and you have to wait for a decently long compile on every single one of them.

I have found this annoying too. However I have just had a quick look at the editor source code and it looks like there is actually a option to turn this off already; at least in 4.8/Master branch.

In the baseEditorUserSettings.ini should be bAutomaticallyHotReloadNewClasses = true. Changing this to false should stop the auto recompiling when adding new classes; Except for the first class that you add to a Blueprint only project. I haven’t actually tested it yet, but from the source code for the master branch, it certainly should work. Though I have no idea if it is in older versions.

Turning it off will stop new classes showing up in the content browser until after you do recompile, and a warning to that effect will be displayed when you add new classes. It will also stop visual studio being automatically opened to that class, and instead the Dialog asking if you want to edit the code should be shown. Which I think should be the shown even if you have it automatically recompiling the classes. Especially now with the new experimental code editor plugin. It has been annoying when I’ve been testing that out, that visual studio is still opened after I add each new class.

Ah well that’s good new hopefully they will expose that in the editor as well as in the .ini then.

Seems it is exposed in the editor (again at least in 4.8/Master branch). In editor preferences, under Miscellaneous and under HotReload.

Ideal! Thanks guys, had no idea that was there. 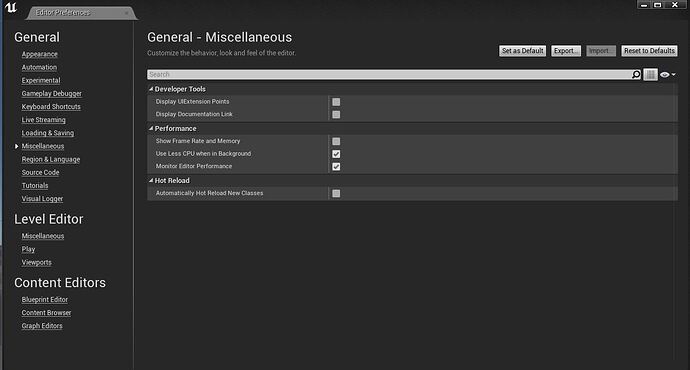