In my packaged game, whenever I have the resolution scale not set to EXACTLY 100, this artifact occurs when I use Set View Target With Blend or when the camera is not a player camera (For example, a non-player camera used to get a close up of an object) which doesn’t just happen during the transition but also when the camera is fixed to the new camera.

I was suppose to release my first game demo today but this bug really takes away from the look and feel. 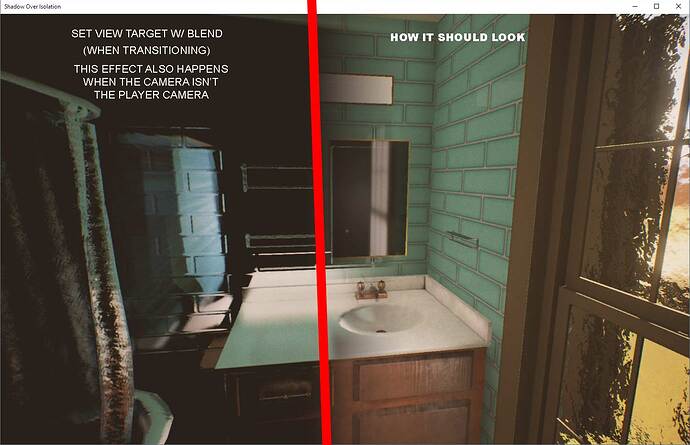 Its nothing special. Its set up so when you click on an object, the view blends. Here is the blueprint. 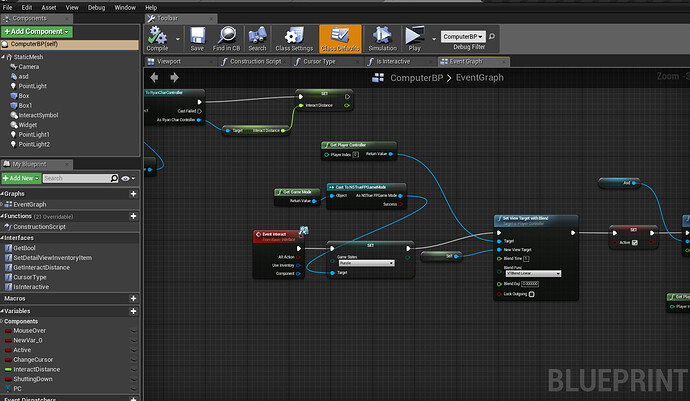 Here is also a video of the effect. Again, this only happens in a packaged game or when you play in Standalone Game. You’ll know when the VT Blend is happening because the screen turns black as if the Albedo/Color layer of the render is not there. Its like its only rendering the Reflections. At the end of the video, you’ll see that once it blends into another camera, the effect doesn’t stop until it starts blending back to the player char/camera.

FYI, this has been a problem for a long time. I just assumed it would of been fixed in the last three versions.

Correction: I tested in the Standalone Game from editor and the effect doesn’t happen. It doesn’t always happen, but it does happen. Right now, every time I launch my packaged game, it happens.

Could you provide me with some screenshots of your blueprint set up where you are calling the ‘Set View Target with Blend’ node?

Could you also show me what your Resolution Scale is set to?

I discovered that setting the scalability for effects to 1 fixes the problem. It doesn’t seem to have anything to do with post-processes as lowering the Effects to 1 or 0 will solve the issue. So once I set the effects to this lower value, when setting the view target to these other cameras that aren’t the player’s, it has a subtle greyish tinge to the view, until I set the target back to the Player camera. Whatever this greyish tinge is, looks to be what caused the problem I’ve had. No idea what it is though. They are straight out of the box cameras with the by the book use of View Target Blending.

Found an answer. Once again, TrueSky plugin causes rendering issues. Fixed it by moving the right files to the packaged game.