I’m aware that you can set the length of a timeline in blueprints by double clicking it, but it would be nice to be able to have an input which controls this. For example, if I have a blueprint of a moving platform which uses a timeline to move between point A and B, and I copy it 3 times and want each platform to move at a different speed, I don’t think that is possible as it is right now. If one could just expose an editable variable called TimeToTravel and hook that up to a Length input pin on the timeline or similar, that blueprint could be reused for all the platforms.

I have submitted a feature request make a timeline editable in the editor (UE-5466). In the mean time you can achieve this effect by creating a new blueprint that is a child of the original which contains the timeline. Then you can add a “Get Play Rate” node and change the speed as you please based on that before playing the timeline in the new BP. Below is a screenshot to demonstrate this process:

The steps above were a simple workaround for what Acriax was trying to do.
Seeing as this post is nearly three years old, it may not be relevant to your case. Can you explain what you’re trying to accomplish? Are you trying to change the speed at which your timeline plays?

I’d like to change the speed of a timeline’s playback. It’s for a door swinging in the wind, and it would be great to randomise it a little each swing. I can think of a few other uses too

Since the origional post 3 years ago, you can absolutely do this now. The secret is when you make a timeline, it auto-adds a timeline component in your variables, go check. With that timeline variable, you can do all sorts of cool stuff with the timeline, including changing playback speed. 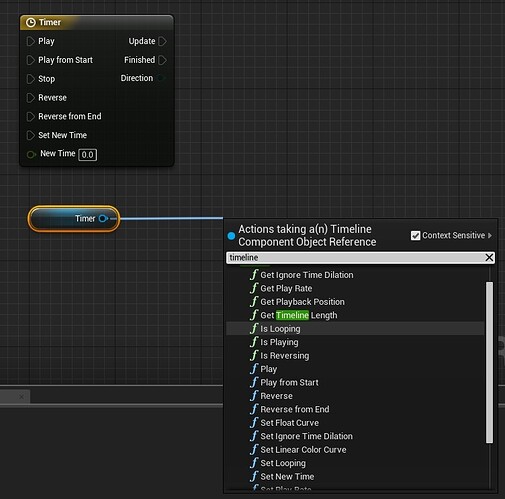 ‘Set Play Rate’ is exactly what I was looking for. Awesome! Thank you! <3

It’s so great seeing the engine progress over time! This is another great feature that seems to have been added because of community outreach. Love you Epic <3