often I’ve to handle very large arrays. It’s currently not possible to shift individual elements up or down: 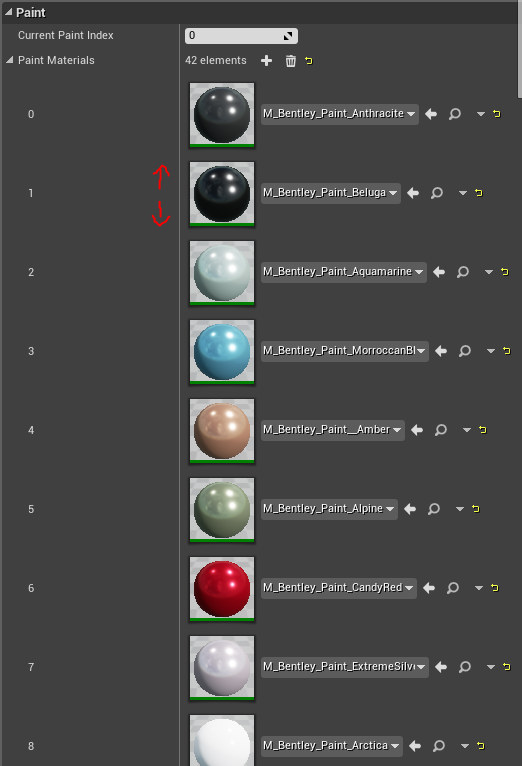 In many cases, the individual order of elements is important to me. The only way to change the order between elements is currently to delete the whole array and recreating it by hand.

Hellooo? Somebody at home?

Just waaaay too busy to reply to feature requests alltogether?

I’ve voted this up.

This feature is one of the core issues (alongside basic tree navigation, custom node naming and speed of operation) that keeps me building my own editors.

CTRL Up / Down FTW

Today, I have submitted a pull request to get that feature in. In the meantime (although since this post is quite old…), you can get the commit there if you want: https://github.com/EpicGames/UnrealEngine/pull/1785

That’s fantastic! Can’t wait so see that being merged!

There’s a similar and newer pull request FEATURE: Array re-ordering in Editor if Tynril’s doesn’t work. It looks like neither will get merged because Epic wants to use drag handles instead of up/down buttons.

You can now reorder arrays as of version 4.18! Check out the 4.18 release notes to see it in action.

Just tried this in 4.18 and it’s not always working. If the array is set to Instance Editable and you reorder it, it will break the array, add new empty items to it. It will show as if the array is fine in the editor, but internally, when the game is running, the array will be different. This will leave the array in a permanently broken state, I found no way to fix it other than to just a git reset --hard HEAD to the previous commit before I tried reordering the array.