Replication (3rd person): rotation jitter; Get Turn and Get Lookup

I’m having a few replication-related problems with my 3rd person melee project (apologies if my use of terminology is a bit confusing! I’ll happily try to clarify!):

I’ll post images of my blueprints as soon as I can. Any help would be greatly appreciated

Problem 1 - I seem to have solved this one (see attached “jitter fix” image for the approach I took), but I’m now entirely failing to get smooth rotation through the Rinterp node. I previously had an approach that I was happy enough with (the character would make small incremental snaps of about 5-10 degrees), but now the character snaps in large steps and changing the interpolation speed has no effect.

Problems 2 and 3 - while the looping problem has been fixed by some more aggressive deactivating of animation-relevant variables, and I seem to have improved the directional input detection, the detection is still not consistent. An attack or block will always be performed, but it’s still tending to default to the “no directional input” option. I’ve attached a series of images of my Blueprints for reference. The image of the anim graph has been annotated with the selection criteria. The purple arrow and box are for the transition from the idle stance to the chambered position (threat) of the relevant attack, the teal arrow and box are for the transition from the threat to the attack animation. 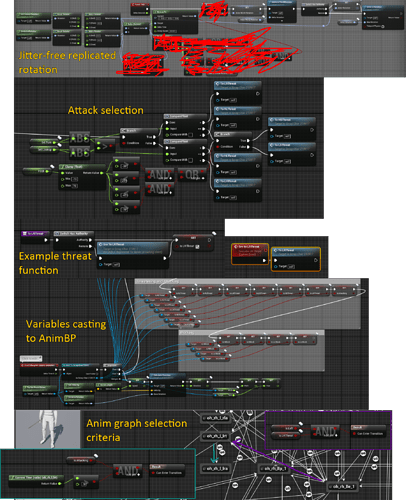