How do I go about replicating this movement function? I need to use a timeline with setactorlocation for gameplay abilities in my project but it causes jitter on clients over netplay. 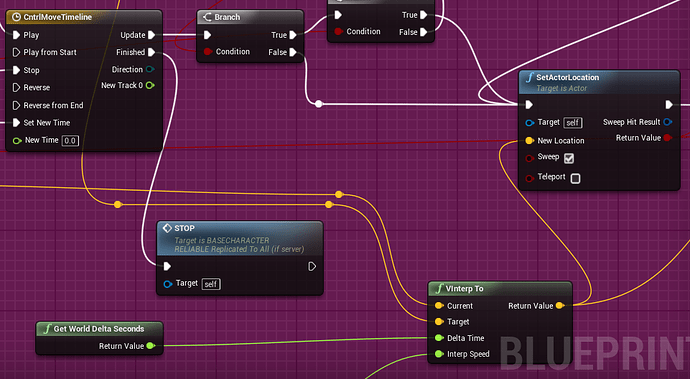 I’m not sure. I struggle with getting smooth network movement when I use anything other than the built-in smoothing of the CharacterMovement component.

Hence the jitter.
Now it’s not quite that bad because Velocity is also replicated, so any missed position updates are filled in by the velocity moving the character in between network updates (but will have to jitter-adjust if there was a change in direction, if there’s no network smoothing).

Now, if you’re using CharacterMovement component, then eveything I just mentioned gets smoothed over and hidden by the nice built-in smoothing algorithms. So then why is it still jittering?

I could be due to that timeline you have going there. Differences in framerate between the two machines, plus ping delays, are probably not smoothed by the charactermovement algorithms.

I’m not sure how to fix this as I’ve never succeeded in getting smooth movement on anything that’s not built-in charactermovement, but it might be worth trying to tell it to stop replicating movement until the Timeline is finished, then turn movement replication back on with a lerp or something. IDK. If you figure it out, let me know!

Also keep in mind that if you’re using a CharacterPawn then the movement is replicated and smoothed FOR you without adding any scripting about it, based on AddMovementInput.

I’ve been trying to figure this out as well. In my case, the server replicates perfectly but the client jumps through the timeline and reacts a second later. I tried hitting “replicate” in the timeline to no success. I used a Multicast RPC right before the SetActorLocation that includes the New Location pin.

Are you using a replicated timeline AND an RPC? The client might be getting different updates from each. Try removing the RPC.

Setting this in beginplay helped with me, allowed me to set actor location on the client and not have the server rubberband me back.