I’ve been wrestling with this for a couple of days now and don’t understand what’s going wrong with replicating my characters rotations in MP.

The first image attached shows how I’m controlling rotation of the player. I want the character to rotate to the direction that the right thumbstick is pointed, and rotate at a speed that I can define, so I’m rotating the character mesh instead of the pawn itself (which, as far as I can tell, will only rotate instantly and not work with any of the interpolation-over-time functions).

The second image shows how I’ve modified the Blueprint to try to get rotation to replicate in a multiplayer game. 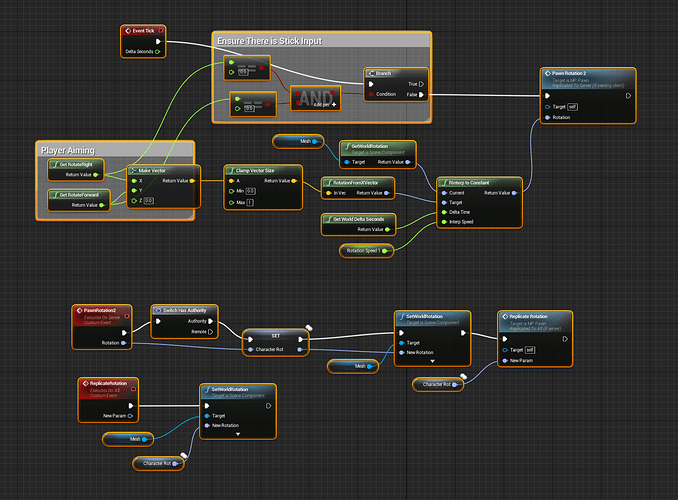 With this Blueprint, on a listen server:

On a dedicated server:

It seems like the information is not being replicated to the clients from the server, but I don’t understand why the “ReplicationRotation” event isn’t casting it to all the clients.

Any help here would be very appreciated! I’ve read a couple of other threads about similar problems, but it seems like all of them end up using pawn rotation, which I can’t use because of the lack of rotation-interpolation-over-time.

Have you tried passing the actor reference into the function to run on the server?

It may be as simple as the server not knowing what actor you want to rotate.
Also, i thought that simply by enabling replication on the actor its position/rotation and any exposed variables replicated.

Thanks for the quick response. I’m still fairly new to BPs - can you be more explicit about how I would pass the actor reference? I’ve looked at the Set and Get Actor References and Referencing Actors in Blueprints pages but am still unclear how exactly I would do that here. Can you point me in a direction?

From what I’ve read, enabling replication on rotation isn’t always as simple as pure movement. Since I’m rotating just the mesh (because I can’t rotate the actor via interpolation, only “Rotate Actor” which forces instantaneous rotation), that isn’t automatically replicated. 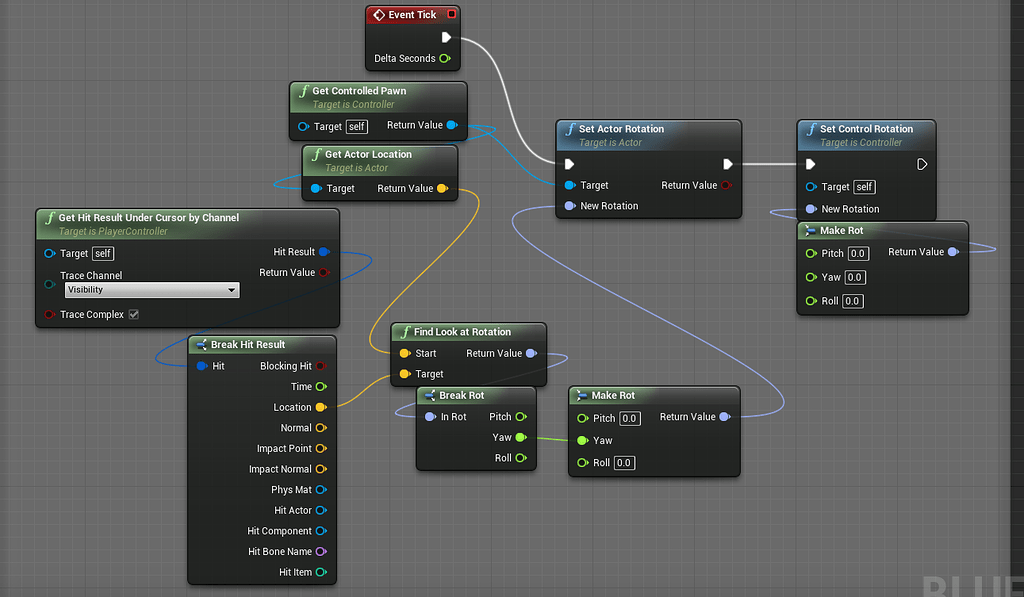 Hey, im trying to make a topdown game with WASD movement and aim with mouse, so the character is always facing the mouse. using a method from a youtube tutorial, like this: Inside my Controller blueprint. The server sends rotation info correctly...

I’ve set all the characters tabs to replicate, and while i get the actor location and events, i’m unable to get the characters rotation itself. Currently i am using a mouse aim to rotate the character by hit channel. Could someone fill me in how to...

When you edit your function that runs on the server, you should be able to setup an “input” of a certain type, once you do, you can drag the actor reference into that. on the server execution node, drag the reference out into the rotation (instead of using self, which the server/clients won’t know unless we tell them which actor to rotate)

Hello @MonsterDrew, have you find solution for this?