Remove specified character in a string

I need to remove from various strings when find the sequence " ,0 ".
Not only , or only 0. Only when is exactly ,0
Is it possible?

Can’t tell you how to “remove” stuff since I don’t know exactly what you are removing but I can show you how to find a string with “,0” . See screen shot below. Hope it helps.

Didn’t even know about this…definitely much simpler than my idea! I would use this method, unless you have some need for extra code ha

Try using the Replace node. Give ,0 as the From parameter and leave the To argument empty.
Like this: 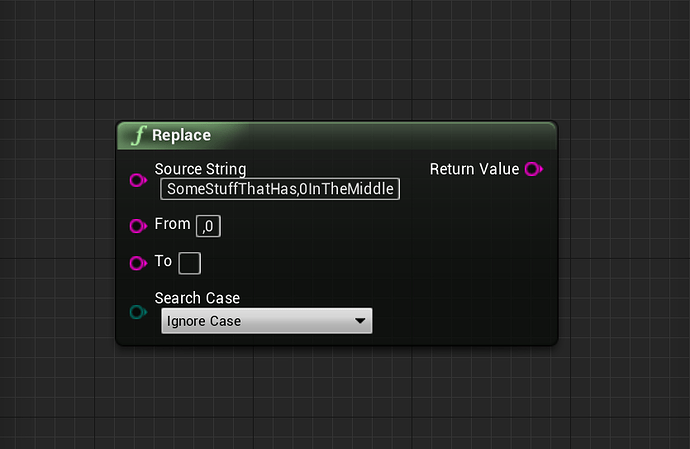 Sorry but i have already tryed this but for some reason didn’t work, this delete another character dunno why.
My blueprint is getting 1 string plus 1 float combine them into string then replace ,0 but when use replace,in the string delete all character, and i see only 0 in screen.
(The code work perfectly without replace)

Thanks but the question is how to remove them, any idea?

Oh, my fault. I had placed the wrong replace, there are 2 replace, one return string and one return int. thank anyway guys

Hi If your looking to remove a single Character instead of all instances of that character;
Create a function > use get characters array from string node & store the array as a local variable > Remove Index (E.G on for each loop etc.)> On Complete; Set Original string to null > Use Join string node and append to concatenate the array and your null string.

(Essentially you are creating an array, removing indexes, then re-combining the array)
In the image I am removing any found character from the input array from my local array. But only removing the first instance of each character found.

My Answer may be of use to you.

OMG Thank you so much for this I worked on this for hours with much more complicated code that half worked.