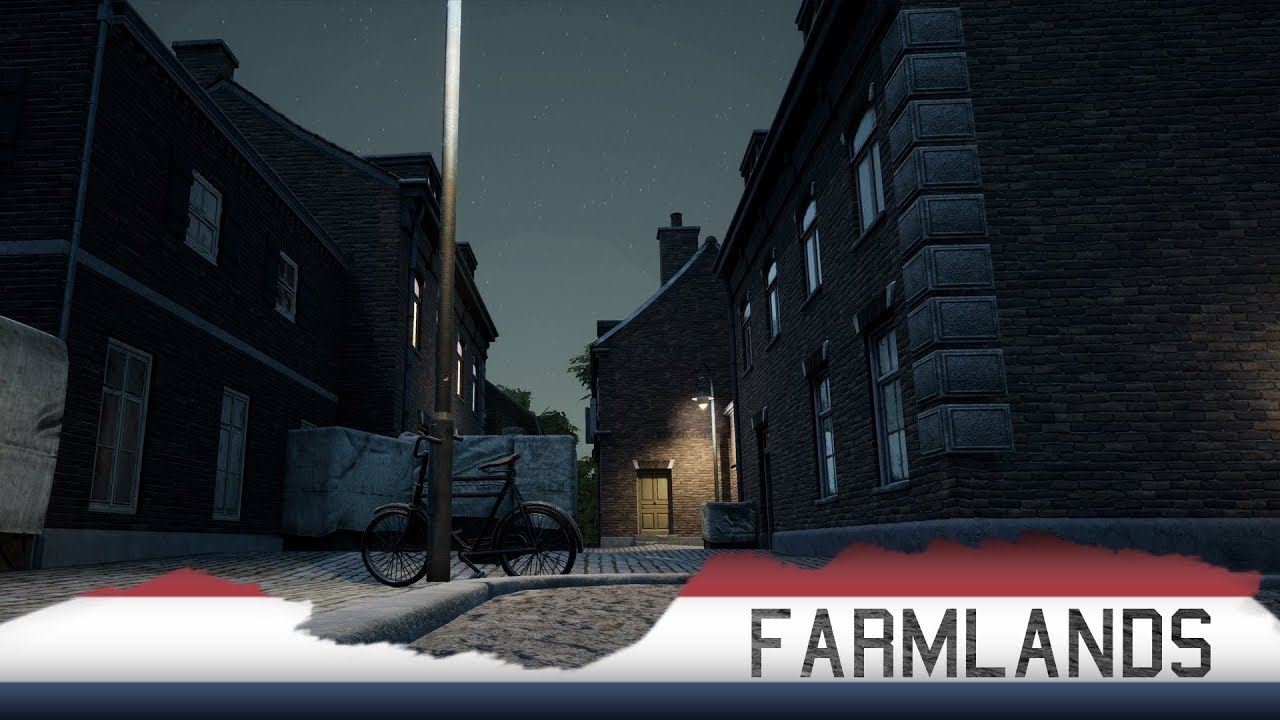 Description:
Farmlands is a Dutch themed map set in a small rural town. The idea is that the allied forces reached the outskirts of a small town and are trying to take hold of the occupied church or to take out their artillery guns.

Backstory:
The map started with the idea of having the allied forces through the farm lands (hence the name) to a small Dutch village. But I quickly found out that there wasn’t a lot of barn/farm assets included with the editor. So the idea slowly formed into less farm lands and more of the village. The first thing I placed was the church. It was originally going to be in the center of the map, but I realized it would be too large and it was going to interfere with my crude made floor plans. So the church’s location was changed to become more of an Axis’ occupied building. The alied forces were supposed to start in a farm like area, but that became more of a simple outskirts of the village. Making it seem they fought their way through a small field to the town.

I wanted the bomb sites to be something remarkable. So the church area became a bomb site while for the other bomb site I used Attillery guns to make it seem like an important point. The Attillery guns used to be on the place where the white plaster house is located, but this turned out to be too close to the allied forces. Turning objective points into small landmarks also worked its way towards the domination capture points. The white plaster house is one of its kind in the village, so it became a point of recognition. The church was reused as a point as well. The last point had to be somewhere in the middle. I used the hotel building to give it some sort of feeling of significance and let the buildings around it make it feel like a small courtyard.

While I was making the map I used a bit more variety in the building placement. However a friend pointed out that dutch towns are often more organized and having rows of houses. So I made sure to add that feeling without modifying my existing map design too much. I also started posting more pictures on the official discord and recieved more feedback and suggestions. Think of stuff like adding more blue/orange colour, letting windows light up the scene or brighting it up etc. Speaking of lighting, the choice of making it night was more of an accidental choice. I was playing around with the lighting and realized they had a night sky included. So I figured I would give it a try. Things like the FLAK fire in the background was also a suggestion made by a community member.

There are a few custom assets made for this map. One of these were the church gates. Mostly because a friend pointed out that the church gates from Battalion 1944 that I used were a bit too fancy for standard Dutch church grounds. So I looked up some simple gates and took pieces of the designs I liked and made by own gate in Blender. Another asset I made was a “knijpkat”. These wind up flashlights were made by Dutch company Philips and didn’t need batteries since they were working on a dynamo. The torches served their role for the Germans to still have a small light source in The Netherlands during the black outs of all lights in case of bombings etc. (Also I’m aware that real life counterparts didn’t stay lit without being squeezed, but I wanted something more local than the standard light sources like lantarns.)

I also felt that the town needed a bit more of an occupied feeling. So I made a banner to hang on the walls of buildings like the church. I also made posters that were inspired by real propaganda posters from world war two. The AA flak is made by drawing smoke clouds and tracer fire in photoshop and using the particle emitter system.

End note:
I hope you’ll enjoy the map! Feel free to leave any feedback or your opinions in the comments. I always look forward what you think of it.

how do I install this