I’ve had this bug since UE 4.17 preview 1, and since it is fatal and not listed as known, I wanted to report it (I’m kinda panicing that this will still be in the final release).

Starting a certain (blueprint-only!) level in PIE corrupts the properties of a mesh. This mesh is not shown in the game, only the collision box of the mesh is still active. The mesh only “kind of” exists. For example, if this mesh is used in a hierarchical instanced static mesh, instances can be added, but removing instances will crash the engine.
This is a regression (does not occur in UE 4.16.2), and there is no fancy C++ pointers involved (Blueprint only).
The effect is visible in the mesh tooltip: 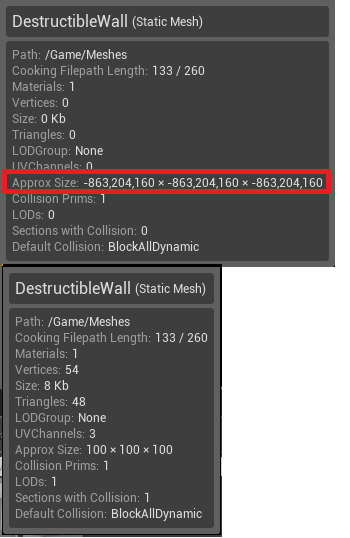 I already spent several hours trying to reproduce it in a small example, without any success. I was able to rule out certain things:
The issue is not related to servertravel (which is what I first thought), it occurs just by starting a certain level in PIE (afterwards the mesh properties are corrupted). Next I thought it was related to dynamically adding/removing instances of a hierarchical instanced static mesh, but actually this is only an effect of the bug, even without adding/removing it still occurs.

If this is not a known bug, and you have any hints as to how I can provide helpful debugging info without sending the whole level, please let me know.

This bug actually made it into the 4.17 production release. I still need to open and save meshes so that the game works after conversion. So I’m bumping this in case someone else also encounters the problem.

This bug still persists in 4.17 Preview 3 (I newly converted the project).

The bug can be fixed by opening the mesh and saving it. So it seems to be related to the project conversion from 4.16 to 4.17. This seems to be why I cannot reproduce it in 4.17 alone.