Can anyone suggest a workflow for placement of multiple lights in a scene?
I will model a luminaire in 3ds max, then export via Datasmith. My plan is to create a blueprint actor of the luminaire with a spotlight , so i can control its light intensity, color, direction rotation etc inside Unreal.
Now I have info in a CAD file for where they should be placed. But I don’t want to create copies of the luminaire inside 3ds max, place them in the proper location, and then export them all to Unreal. Because then I can’t convert them to a blueprint that will share properties with each other (or maybe that’s possible?)

So I’m guessing would have to export a single copy from max, turn that into a blueprint in unreal, put all the logic, and then copy that blueprint and distribute in the scene.

My question again is, what method should I use so I know where to place the blueprint luminaires in the scene? I just need something to reference their locations in the plan. Should I create dummy objects in max, place them in the location of the luminaires, and then export them (as a separate datasmith file which i can remove later)?

The replacement method seems like a good option. You could even build a quick editor widget to automate the process.

You can sync blueprint parameters via a material collection or “master” blueprint that could be referenced.

Thanks for the reply. Sorry but I’m a newb in blueprints, and not sure how to go about doing that.

I’m guessing this is a general bp script that can be used to distribute any object, by replacing already existing ones (like the instanced dummy objects).

Is there a good tutorial I can watch on using a master blueprint?

Forgot that unreal has a built in function to replace actors.
Select you actors to replace and right click. There is a replace option 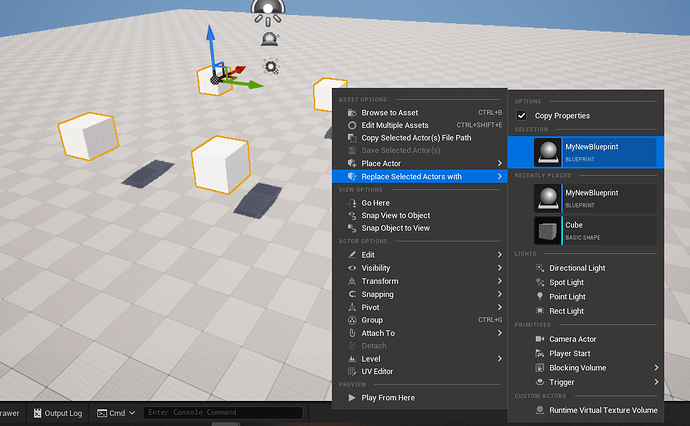