I recently posted this on the UE4 Answerhub. Mindfane and I made some progress using a SceneCapture 2d camera that moved and rotated relative to the player, but user Jacky suggested that we post the same question here on the forums to get some more feedback.

I recently started using Unreal Engine 4 and was disappointed to see the removal of the UTPortal actor. I’ve tried experimenting with SceneCapture2D and depth buffers to get a similar effect, but the resulting view, while three-dimensional, lacks any sort of perspective detection and the view remains stationary.

I essentially recreated the effect shown in this video - YouTube
It’s certainly better than just a flat real-time 2d texture, but it is a far cry from what the UTPortal actor could do. Does anybody have any ideas? 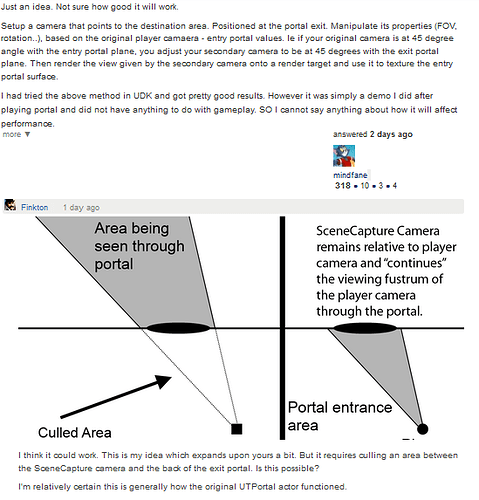 As you can see in the video posted by Mindfane, the result is still less-than-optimal. Namely, there is noticeable lag for the image through the portal. I have a feeling this is due to the use of ticks for timing the movement of the scenecapture camera.

Any suggestions on how to improve this? Feel free to post any completely different ideas your might have as well.

I created this effect a while back for Unity in C#, and I too have been trying to replicate it for UE4. Unfortunately, no success here. There’s a few things you need for it to work and most of them don’t seem to be available through blueprint. Altering the projection matrix definitely seems impossible in blueprint. A few other issues I quickly ran into were dynamically creating render textures, and dealing with differing camera aspect ratios at run time. As for the visual lag, it’s got to be an issue with when things tick. I would guess that tick is called after each frame is rendered, adding 1 frame of lag at least, and then I’m guessing capture actors are delayed in some way, adding more frames. Really not a clue how to deal with this as I don’t really know when Unreal calls it’s various functions and in what order.

Sorry to say that I don’t have a clue where most of these things are in C++. I’m happy to share my C# code from Unity, but I don’t think it’ll help you much. Still, something I would love to see in Unreal.

Delta seconds seems to be of no use in this situation. Unless there is a different event that can be used in place of Event Tick.

Sounds like something to get added to the roadmap. If you post the request in the roadmap thread there is a good chance they will see it and throw it up there.

I have been researching on this topic for a while.

Played the portal games again and again for several weeks.

The portal team had released several articles on their tech over the years although never really explain how they implemented the seamless physics across their portals. However I came across some papers which explains how the visual effect can be achieved without using render targets.

The idea is to use Portals (not to be confused with portal game portals). Those are the things used in earlier engines to determine visibility of various sections of the map (I think idTech engine and the first UnrealEngine uses it). I dont know if the current generation engines uses it anymore. Anyway inorder to create a portal-game-portal, we will define one Portal (which is a quad) for each opening. During rendering we do this following things.

I got a friend to try this with a simple opengl setup (not done using unreal-engine, since we were not sure how unreal’s rendering worked)

The advantage of this method is: 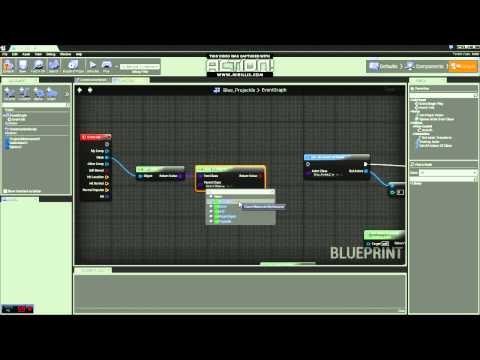 As far as I can see it does not have the visual effect of a portal. I think it simply teleports the player from one portal to the next. We are trying to find a way to have seam-less portals, like we see in Portal games.

Let us know if you come across any other video/tutorials/articles related to this.

Hey all, so I think it’s time for one of these again. Technically is no wip and it is no released project either, but a collection of some one-nighters or other things I did just cause. The Work in Progress section seemed to be the right place for...

yes but there isn’t tutorial …

Please make a tutorial for this. Nice to hear that someone solved projection matrix making and some issues related, but nonprogrammers are just helpless to look at these unspecific explanations.

Hey everyone. i thought I’d just hijack this thread with my approach - which has one massive flaw.

What i am basically doing is spawning an “outsourced” camera with a Cap2D at the same spot as Doorway “exit”. I then change the relative position to Doorway “exit” to the same as the player is to Doorway “entry”. The rotation achieved by using “Find look at rotation”.

Now my camera is obviously moving too far back, leading to the doorscreen showing the back of the exit portal.

I have tried to adjust for this by fiddling around with the FoV settings, but while I can limit what the camera sees in this way it also automatically “zooms” the whole thing in.

I’m very interested by this feature and I tried to do this too .

Unfortunatly I’m a beginner with programming and blueprints …

Before I found this post, I already searched some informations about the seamless portal transition.
So, maybe everybody in this thread is already familiar with this … But I just want to help :

The team of the Portal game worked on an other game with this feature before Portal. The name was Narbacular Drop (Narbacular Drop | DigiPen). In this website, i found something interesting in the pdf named " Technical design document" at the 19th page. This is a short describing of the methode they used :

I’m working step by step, and my first step is already a problem :
For now, I just tried to create a “furtive quad” ( a plane with the exact image of the background) . Ideally, if I walk trough the quad, I should see absolutely nothing special happened…
Into the blueprint of my quad :
I get the relative position of the player camera, and set its position to a 2DsceneCapture, but I always get a position offset… why ?

ps : I know …the " furtive quad " is the most stupid feature in a video game ! xD But i think it is the most important step to get a seamless portal transition.

I have the majority of this figured out (albeit very buggy). I’m using a similar method of finding the camera’s rotation, but I’ve also included a way of (mostly) correctly finding the right field of view of the SceneCapture2d. By using the law of cosigns, and knowing the portal size, we can draw vectors to two sides and find the angle from there. This has lead to some odd distortion when up close, likely a result of the angle estimation I used. I’d be interested if anyone can fix this, but for distant portals I think this method is workable.

*OP and BP correlate to the orange and blue square frames in the world. And I know there’s a lot of extra fluff in there, I’m pretty new to blueprints/programming in general lol.

I have been searching for a while and eventually found out this channel. It’s not my channel, but I believe it explains how to do what you guys are looking for

Unfortunately they only show how to setup a basic portal, but missing the part of creating realistic visuals (different camera angles etc,) for the portals.
I’m still looking for help to get this done.
The SceneCapture2D solution is not very performance-friendly…

Yeah… ScreenCapture2D will eat up a lot of your processing power but might still be the best way to work if you use it to move parallel to the player… I got all that set up … but the problem I’m facing is, that i need the captured texture to be projected onto the “plane” from the players view… and I cant figure out how… Can anyone help with that?

Well ok… finally figured it out by myself… It was just one little node I actually allready looked for but couldn’t find, because I did only know what it does, not what it’s named…
I will put a link to a project with a working portal (BluePrint). I’m quiet new to any game engines so I had a hard time finding all the options.

There are a few things to mention:

Well ok… finally figured it out by myself… It was just one little node I actually allready looked for but couldn’t find, because I did only know what it does, not what it’s named…
I will put a link to a project with a working portal (BluePrint). I’m quiet new to any game engines so I had a hard time finding all the options.

There are a few things to mention:

I’ll check it out later.

If anyone needs some help to recreate this project just ask