Basically what I am looking to do is move one piece of geometry through another, and have the volume ‘carved’ out of it, similar to the effect seen here using a subtractive cylinder brush: 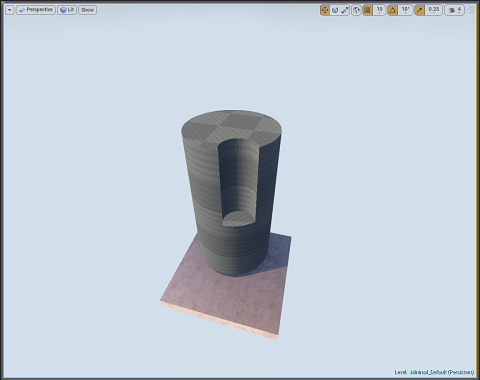 What I was going to attempt was to have a subtractive brush move along while creating duplicates of itself, however I can’t seem to find a means to actually move these ‘brush’ objects at runtime or instantiate them at all.

If this is possible to do, please advise me of how I can achieve it. If it cannot be done like this, I would love to hear an alternate solution to ‘carve’ geometry in real time.

I don’t think BSP was meant to be used at runtime.

If you plan on making only slight modifications to the mesh you could use dynamically created geometry like CustomMeshComponent and recalculate/update the vertices yourself. But if you thing about some serious changes to the shape my suggestion would be to look into voxel-based geometry instead.

Thanks for your response, I was originally thinking that some kind of high density voxel-based geometry would be ideal actually, however I was unaware that you could do that kind of thing in Unreal Engine.

I saw someone mention something similar in this question, however the link in the response doesn’t work for me:

Im looking for a way to create dynamically generated meshes and render them, ive found the FDynamicMeshBuilder, and that could do the work, do i just create a new instance of that object, and then fill in it the vertices, or i have to do something...

Also when I search for “voxel based geometry unreal engine” or similar search terms all I get is stuff about Voxel Cone Tracing.

If you have any idea of how to get voxel based geometry in Unreal Engine 4 please let me know, or if someone could at least point me in the right direction it would really help me out

Those are old forum links, not sure if there is still some way to access them.
AFAIK there is no built-in voxel in UE4, you will have to do some implementation

Unfortunately I never worked with voxels so can’t help you any further, but might be worth looking around the forums.
Good luck!

hi,
have you been able to accomplish what you wanted? I mean geometry editing in runtime?
I tried to fake it somehow using render target, light, opacity ,… but nothing seems to work