Epic’s Metahuman and Reallusion character side by side in Unreal Engine 4, direct sunlight. 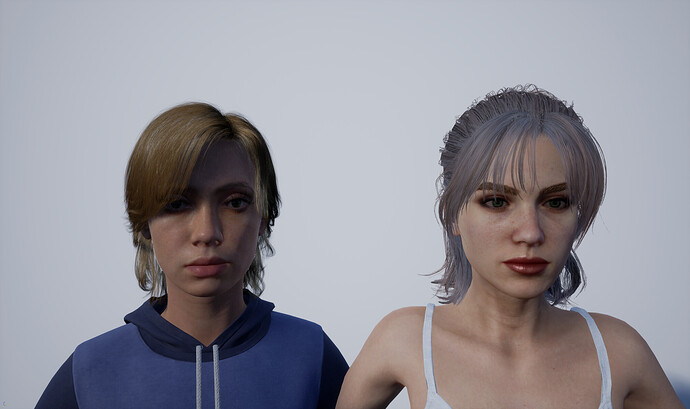 As I see it and understand it:

Reallusion:
Possible to modify and adjust almost anything.
Characters are easier to use in Unreal because of the traditional set-up.
Hair has cloth physics to give some movement; doesn’t look great but can be used in games.

Metahumans:
Free!
Highly sophisticated LOD system.
Character creation is easier.
Strand-based hair looks incredibly good. (But are people using it in real projects?)
What we are seeing now is only early access.

What’s your take on this?

Metahumans are more orianted to films prod. while cc is more towards games.
I love Metahuman rig escp. face rig. It’s next level for belivable animation.
Shaders too!

I agree that currently CC has a better pipeline, especially with custom clothing and accessories and the new skin system isn’t bad either (meta humans I think are FAR superiour).

My biggest gripe with CC characters is that retarget animations alwasy look not quite right. I pretty much ALWAYS have trouble with the shoulders. Even with basic walking animations the shoulders look too pulled together and not quite right.
With the meta humans, I have no problem with retargeted animations (even the same walk animation that CC has shoulder issues with) I just change the spine_01 → spine_03 retargeting map as you should and BAM… animations look pretty good on a meta human.

On this… has anyone ever run across the shoulders not looking right in animations with CC characters and figured out how to fix it.

You can make a copy of the animation, make some adjustments in the animation window, like an animation layer really… I just fixed the hunch on my idle really as it showed more there. The rest seem goon enough.