Good Morning everyone, I am looking to use UE4 for real-time tracking and visualization of retro-reflective markers which are recorded using Vicon cameras. This is primarily going to be for medical purposes, such as gait analysis and orthopedic surgery, so the aesthetic output isn’t important; it just needs to be accurate.

I have found a few threads relating to the real-time capture using the Kinect and using pre-recorded Vicon data for animations but I couldn’t find any real-time Vicon threads so I was wondering if you could please point me in the right direction?

Not sure on those cameras specifically, but a team I know from work is working with Centroid cameras and their software, they just pull the data out straight from it and send it through a TCP socket into Unreal I believe (through a plug-in they made in C++).

I figure it would be simple enough to do the same with any other camera, providing you can get the motion data out of the software in realtime. You might need an SDK for that though. Of course because it’s motion capture, it’s not very finite or accurate either, so for small movements like hands/fingers and stuff it might not be the best approach.

Maybe you could port this openFrameworks plugin to Unreal? It looks like an interesting starting point at least. Using OSC to bundle up the messages from your Vicon server and send them into your application seems like a pretty common solution though.

GitHub - kylemcdonald/ofxVicon: Wrapper for interfacing to the Vicon motion...

Vicon’s Pegasus suite seems to do what you’re asking…

Pegasus is Vicon's retargeting software that will take streaming data from Tracker, Shogun, Nexus or Blade and allow it to be applied to a custom skeleton or model. 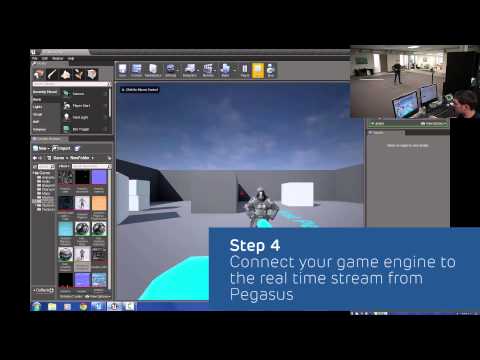