The game was initially built in Torque 3D and we managed to get it to a Closed Alpha, but then hit the limitations of the engine (not a topic I want to get in to on this thread). So after a fair amount of research, we finally decided to move everything across to UE4. Over the last few months, I have spent countless hours going through UE4 and getting to a stage where I am comfortable with the engine (note necessarily a guru). Tonight I have taken the first solid step in migrating the game to UE4.

The game is currently fully networked enabled and I made sure I was doing this from the start, I am now busy getting the HUD in to place.

This is the HUD in UE4 (some elements are not enabled yet): 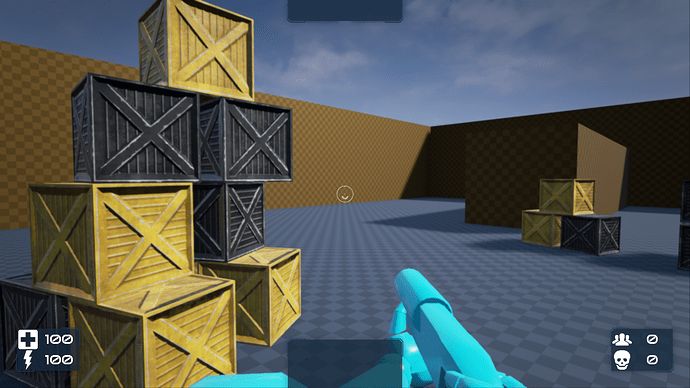 This is the HUD in the original Torque 3D:

There is still a way to go yet … but this marks an important milestone in the game and I am extremely excited. I will continue to post updates as and when I get time, stay tuned for a FPS game that I want to play.

To sign off … here is the basic Trailer with stills … a new one will be done with live footage when I have some.

We now have working Teleporters, these operate in the following ways:

Teleporters can also be set to be both entrance and exit … in essence this is a two-way teleportation system.

And as usual … we have Telefragging … don’t hand around the teleporter pad to long … there is nothing more humiliating then dying like that. Anyway, here are the screenshots … low res for now as this is still an early prototype. 8-}

p.s. - Can’t upload images so I had to use some links instead.

Interesting project, i think that you should put health bar in right corner.

@RaPtOr_v9600: Thanks. Yeah there are health and energy indicators … see the first post … these screenshots were taken using the “shot console” command at 1 second intervals … just so I could easily capture the process. I am also not happy with the textures … I need to work on this still. 8-{