Rain Garden: Forest in a Bottle

A cinematic animation of a relaxing indoor rain garden terrarium, rendered in real-time using Unreal Engine 5. This is a rework of an old project, originally started in Blender Eevee as a test of what real-time rendering was capable of.

Excellent work. Any chance you could share how you achieved sss with the foilage using Lumen? Also did you use Nanite for the foliage by making the leaves double sided in Blender before importing into ue5 since you are using close up shots, the leaves are less likely to disappear as the camera moves away even if they are single sided or the leaves are using the double sided foliage in ue5 and are not Nanite enabled with Lods?

Hi! Thank you so much!

As for the sss - spoiler alert: it’s not actually using lumen! Just the normal sss shaders. It kind of gets away with it because there’ so much other green in the scene - including the walls and the bamboo stems (which does cast lumen GI) that it more or less evens out… I’ve linked a little breakdown below which might sort of explain it - if you look closely at the leaves, they’re not casting GI but they are sort of receiving it… 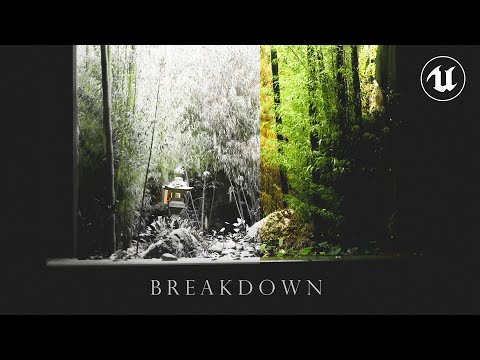 Thanks a lot for the info.
Yeah, I gather the final release will be next year. Hopefully we might get some more early access release before that for us to tinker with

This is quite beautiful and relaxing to watch.

Looks like the shrine in Sekiro. Put a little Wolf in there…

It does! Thank you!

Can I ask, how do you achieve the water droplets/water puddles? Is that a blueprint online somewhere? I’ve just started focussing on FX in Unreal myself creating my own fog, wind, etc