No matter if i click a button that does a quit game node or type quit in the console my built game just freezes. It works when i play in editor or standalone but once i build and open the exe it freezes and i have to kill task. anyone know why?

May be anything; you need to run in debugger to find out what it is.

im completely new and dont have much in this game, i dont know how to run it in a debugger, could you elaborate? is this a ue4 function? or do i just go find a general debugger somewhere?

Illustrates the methods on how to Debug your Blueprints.

Yea it all works perfectly in the editor. Standalone and editor window. It’s only after cooked and run from binary that I have the issue. No crash just a freeze. I will look into visual c++ debug I guess…

The question perhaps it why works on editor since that BP ask for the player controller. 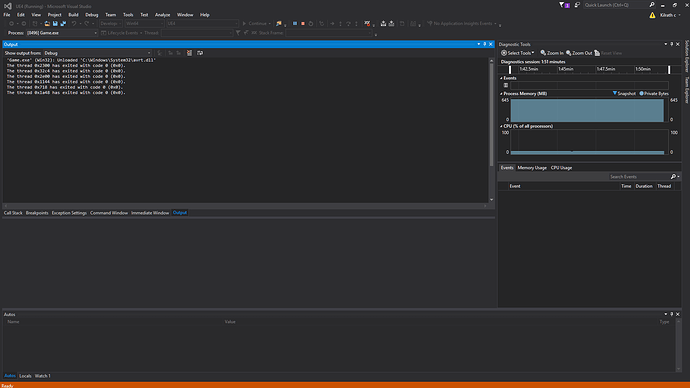 And setting a specific player changed nothing… dunno what else i can do on this, hate to have to start over because a game cant terminate (the easiest thing a game should have to do lol)

I think isn’t the Quit action causing freeze, but I also have no idea what it is.
Before submitting a bug repport I would copy Config, Content and .uproject files into another folder and package to see if the same issue happens again.

Where is your quit game bp located?

it is located in my menu widget after onclicked quit button… could this be the issue? do i need to call out to the gameinstance to do the quit instead?

Moved the quit game to the game instance and still locks up solid.

I have in my gameinstance a simple custom event that executes a command console “quit”.

In case anyone comes across this from an internet search, try this:

If doing this from HUD widgey, use “get owning player” for the specific-player pin

In case anyone comes across this from an internet search, try this:

If doing this from HUD widgey, use “get owning player” for the specific-player pin

Next time you could check the latest postdate before u reply