So I’m slowly starting to get to grips with things, but I realized I had put some spawner stuff on the main island level, is there a way to open the dino spawns sublevel primarily, but still see the terrain sublevel for placement?

See my screenshot below for an example : 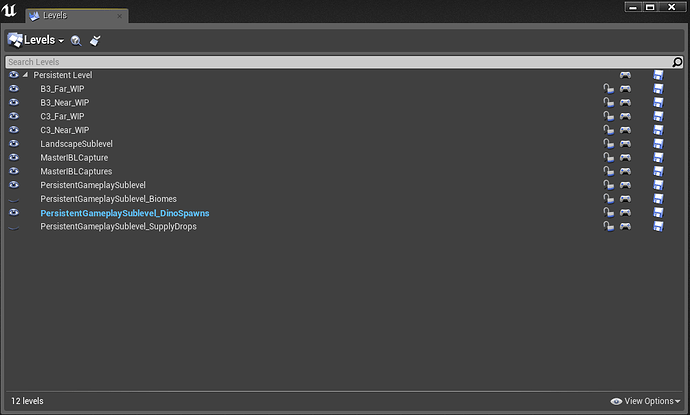 Great, that worked, thanks. Missed the stupid little eye for some reason. Now I have a new issue.

The first time I put a spawn volume, zone volume and manager on the island terrain level it worked fine. This time I tried putting it on the dino spawns sublevel and I’m not seeing anything spawn. This is just running single player through the editor (standalone client mode), so it shouldn’t be a matter of cooking or anything like that.

Is it possible that 2 different spawn/zone volumes overlapping would cause an issue (I did move the locations)? would my count be seeing other dinos not spawned from it, and thus not be spawning anything? although I had 2 locations and the second was on a beach that was virtually empty whenever I checked it over a 10 minute period (kept leaving the area to check the other).

If I can’t add to the dino spawns layer, where would be appropriate to try next. Should I add my own sublevel for my spawns? would this bloat the cooked TC a lot, or would it be a better way to do this to avoid complicated merging on updates later?